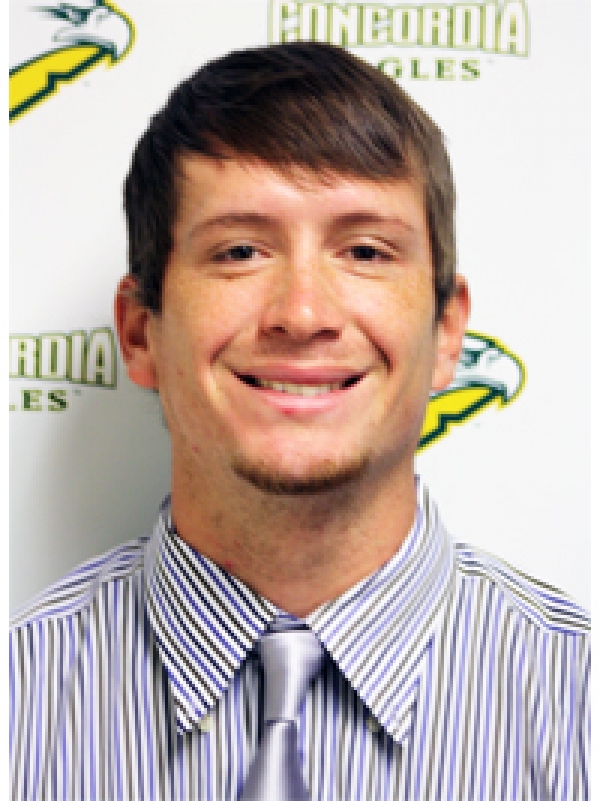 The Eagles, the pre-season pick to win the Golden State Athletic Conference, got a win in the first good matchup this season. The Tritons are ranked #23 in the Division II pre-season poll.

The Eagles got an early 2-0 lead on an RBI single by C Chris Kuber and a sacrifice fly by SS Matt Palmer. The Tritons got one back on a solo home run by starting pitcher Justin Rahn. The Eagles took a 5-1 lead in the top of the fifth on RBI singles by 2B Spencer Ofelt and DH Joe Golderberg, and a run scored by Ofelt on a double play. However, the Tritons tied it with four runs on the bottom of the fifth, led by a two-RBI triple by 1B Richard Siegel. Siegel actually hit a home run, but the home run was taken away because he failed to touch home plate.

Four Eagles pitchers, Chris Garrison, Phil Gerber, Sean Buford, and Danny Romero, held the Tritons scoreless the rest of the way. Gerber and Buford pitched hitless innings, and Romero, who pitched the 11th inning, struck out three of the four batters he faced.

The Eagles pushed across the winning run when Kuber and Palmer drew walks to start the 11th inning. Pinch-hitter Chance Kopacz hit a ground ball to shortstop, and a throwing error by the second baseman allowed Steven Hurst, pinch-running for Kuber, to score.

Rahn finished the game 3-for-4 for the Tritons. Buford got the win for the Eagles, and Romero got a save. 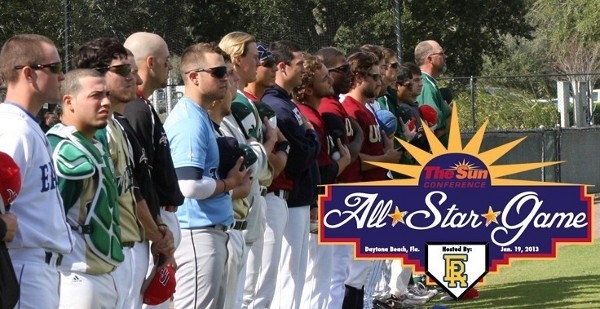 11 South pitchers combined to hold the North to four hits in a game played in Daytona Beach, FL. The South led the game all the way, starting with two unearned runs in the top of the first. The South extended their lead to 4-0 with a two-RBI double by 2B Andy Ruiz (Florida Memorial) in the top of the second.

The North answered with a run in the bottom of the third on an RBI triple by CF Billy Farrell (Webber International), who then came home on a ground out by 2B Terry McClinton (South Carolina-Beaufort). The North got as close as 4-3 in the bottom of the seventh when LF Josh Longbrake (Webber International) was hit by a pitch, and scored on an error.

The South got the winning run in the top of the eighth. CF Brandon Kirby (Warner) walked, stole second and third, and scored on a throwing error. 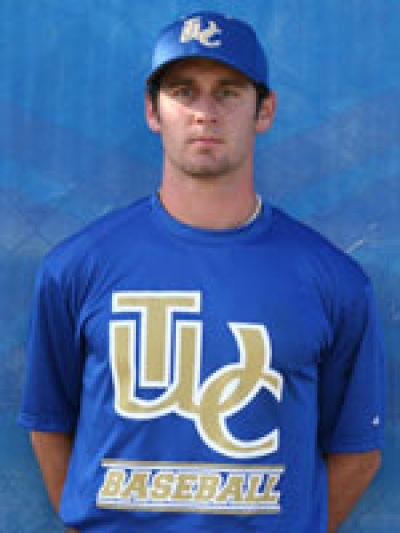 The Tennessee Wesleyan Bulldogs got five RBI from 3B Taylor Oldham and five unearned runs to defeat Rogers State 10-6 in the final. It was the fourth time in the tournament that the Bulldogs scored in double figures.

RF Jordan Guida hit a home run, and his seven home runs for the tournament is a record. (He hit only five home runs during the regular season.) The Bulldogs trailed 6-5 after seven innings, but they put up five runs in the bottom of the eighth. Three of them came from a home run by Oldham, but the winning run came on a two-RBI single by 1B Jake Stone. 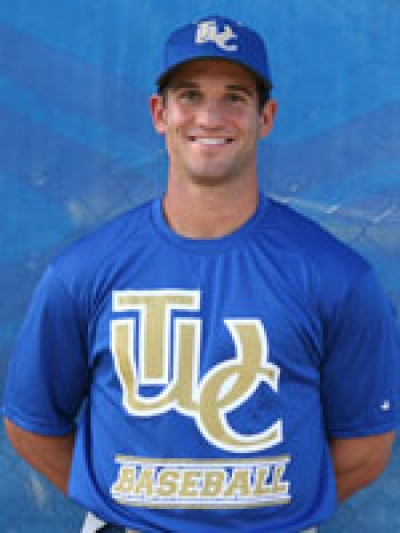 RF Jordan Guida hit three home runs, batted in six runs, and Tennessee Wesleyan defeated LSU-Shreveport 17-10, before a crowd of 1,870. The Bulldogs led 13-2 at one point. The Pilots got as close as 13-9 before the Bulldogs put it away with four runs in the top of the eighth, two of them on Guida's third home run.

This is the third time the Bulldogs have scored more than ten runs during this tournament.

The Bulldogs play Rogers State on Friday at 6:35 PM PDT for the championship. Both teams are going for their first-ever championship.

All games are webcast by KOZE Radio (audio and free) and nmnathletics.com (video and $9.95 for a day). Live stats are available for all games by clicking here.

National Championship recap for May 26 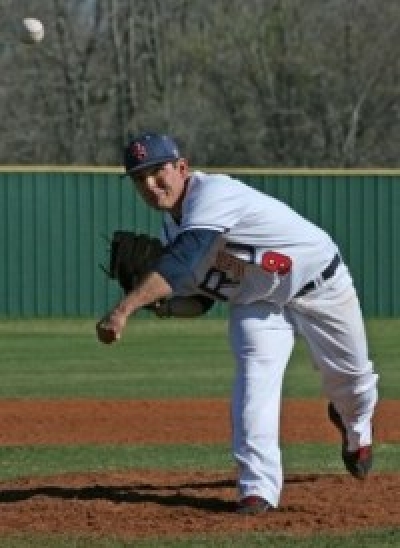 Schedule for Monday, May 28 (all times PDT):

All games are webcast by KOZE Radio (audio and free) and nmnathletics.com (video and $39.95 for the series, or $9.95 for a day). Live stats are available for all games by clicking here. 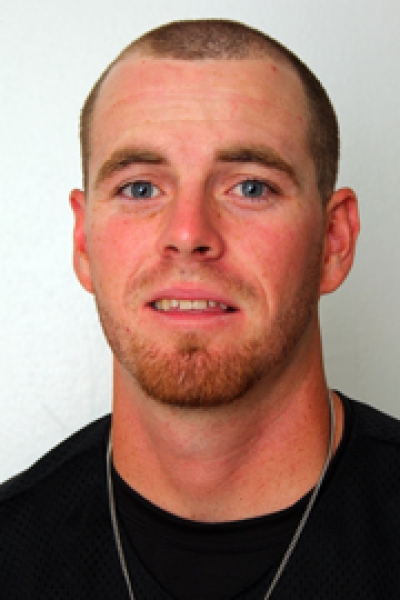 Oklahoma City, Lee, South Carolina-Beaufort, and the College of Idaho have qualified for the Baseball National Championship tournament. Results from the fifth day of the NAIA Baseball Opening round:

Oklahoma City 3, Sterling (KS) 0: The Stars finished this tournament with a phenomenal three straight shutouts. Sterling had the tying run at the plate with no outs in the top of the ninth, and Patrick Goelz came in, threw nine straight strikes to end it.

The winning run came in the third inning, on an RBI double by 1B Miguel Beltran. Beltran went 3-for-4 for the game. Starter Blake Schwartz got the win, went six innings, allowed five hits, struck out seven.

South Carolina-Beaufort 11, Saint Thomas (FL) 2: The Sand Sharks scored eight runs in the fourth inning. 1B Brandon Collins went 2-for-4 with a home run, a double, and three RBI.

The Sand Sharks earned this trip to Lewiston in only the fourth year of their program. 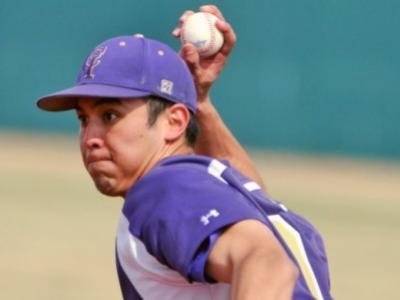 College of Idaho 7, Azusa Pacific 6: CF Tyler Andazola hit a ground ball in the bottom of the ninth to score SS Tanner Hodges from third base to give the Coyotes their first trip to the National Championship tournament since 2002.

Todd Griffiths, who pitched a complete-game shutout against Menlo on Friday, went 8 1/3 innings in this one, allowed 11 hits. He was relieved by Taylor Nicholson after the Cougars tied it with two runs in the top of the ninth. Nicholson threw eight pitches, got the win.

Lee 8, Missouri Baptist 5: The Flames scored five runs in the top of the third inning to break a 2-2 tie. 1B Roberto Reyes hit a three-RBI double.

This will be the sixth straight trip to Lewiston for the Flames since Mark Brew took over as Head Coach. 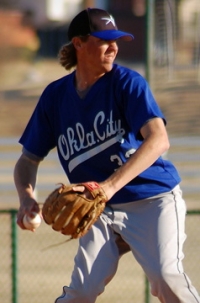 Oklahoma City gets two shutouts, stays alive. Results from the fourth day of the NAIA Baseball Opening round:

Oklahoma City 7, Sterling (KS) 0: Ryan Gibson came close to duplicating Crabaugh's performance earlier in the day. He also allowed only four hits, walked one batter, struck out seven, threw 120 pitches. It was Gibson's fifth start of the season, and his first complete game. The Stars got the only run they needed in the first inning, on an RBI single by RF Dane Phillips. Phillips went 2-for-3 with two RBI for the game.

Oklahoma City 4, Lubbock Christian 0: Cody Crabaugh pitched a complete-game shutout to end the Chaparrals' season. He allowed four hits, didn't walk a batter, struck out five, threw only 98 pitches. CF Cody Ferrell singled in the winning run in the second inning. The next batter, 2B Brian Fisher, put down a squeeze bunt to bring in the insurance run. C Chad Carman went 3-for-5 with a home run and an RBI.

The Stars and Warriors play the "if necessary" game on Monday at noon CDT. Live video (for a fee) and live audio (free) are available here. 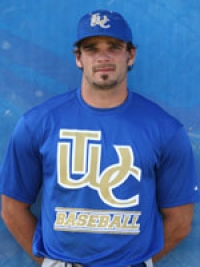 LSU-Shreveport, Tennessee Wesleyan, Embry-Riddle, Point Park, and Rogers State have qualified for the Baseball National Championship tournament. Results from the third day of the NAIA Baseball Opening round:

Tennessee Wesleyan 14, Saint Francis (IL) 4: The Bulldogs got all the runs they needed in the third inning, on RBI singles by 1B Jake Stone and 3B Taylor Oldham, and a three-RBI double by DH Drew Levi. Levi went 3-for-5 with four RBI. Jeremy Fitzgerald got the win. Saint Francis used eight pitchers. 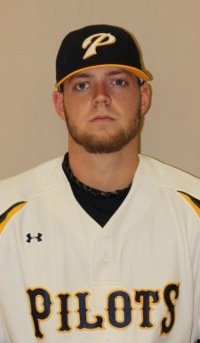 Results from the second day of the NAIA Baseball Opening round:

Saint Thomas (FL) 6, Union U. (TN) 3: The Bobcats go to 2-0 in the tournament. Pinch-hitter Oscar Romero hit a two-RBI single for the winning run.

LSU-Shreveport 1, Lindsey Wilson 0: Lindsey Wilson starter Darren Travers gave up a run in the first inning on an RBI single by 1B Greg Friesen, and held the Pilots scoreless the rest of the way. The Pilots needed a shutout from Jared Mortensen, and got one. Mortensen held the Blue Raiders to four hits, struck out ten, and walked only one. The Pilots will face the Peru State-Lindsey Wilson winner tomorrow for the championship.

Three upsets on first day of Opening Round tournaments 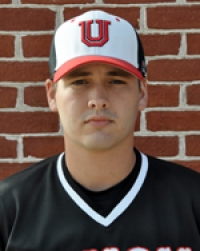 Union U. (TN) 3, Faulkner 1: (at Hardeeville, SC): After defeating Asbury 7-1 earlier in the day, the Bulldogs defeated #5 Faulkner with a complete game by Will Irwin.

Irwin, a transfer from Auburn, held the Eagles to six hits, and the only run the Eagles scored was unearned. Irwin struck out eight, didn't walk a batter, and most of the balls put in play by Eagles batters were harmless ground outs. He threw 125 pitches. He was also 2-4 at the plate.

Eagles starter Will Dismukes matched Irwin's performance for the first five innings, and the Eagles had a 1-0 lead going into the bottom of the sixth. However, the Bulldogs loaded the bases, and 1B Kody Pinson drew a walk to bring in the tying run, scored by Wacey Russell, the courtesy runner for Irwin. C Doug Joyce hit a two-RBI double in the seventh to bring in the winning run. Joyce went 3-for-5 for the game.