Conference tournament roundup for May 6 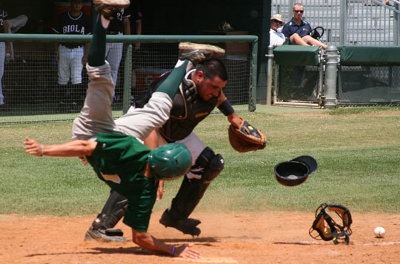 #1 Embry-Riddle won their third straight The Sun Conference tournament, defeating Saint Thomas 10-2. The Eagles got all the runs they needed in the third inning. SS Jordan Romero scored on a throwing error, 3B Steve Sabins hit an RBI double, and 1B Ben Kline hit a single to score Sabins. Daniel Eaton got the win, went eight innings, scattered nine hits. Kline was 10-19 for the tournament, with two home runs and ten RBI.

Concordia-Irvine (ISR #24) won their first-ever Golden State Athletic Conference title, defeating Biola 14-4. Concordia out-hit Biola by only 13-11, but Concordia got it started with four runs in the second inning; a two-RBI by 2B Robbie Knowles, a sacrifice fly by SS Edgar Guillen, and an RBI single by CF Matt Ivanoff. They got the winning run an inning later, when courtesy runner Sean Costella scored when 3B Danny Casey was hit by a pitch. Costella scored two more runs in the game, including a acrobatic move to avoid a tag coming home on a double by DH Bryan Nicholson. Story (with video) from Concordia-Irvine site.

Results from the NAIA West tournament in Atherton, CA:

College of Idaho defeated #20 British Columbia 6-2, forcing one more game to decide the championship. Joshua Orr and Bobby Wassman combined to hold the Thunderbirds to six hits. CF Kyle Douglas and 1B Gavin Gamboa hit home runs for the Coyotes.

To get to the final, the Coyotes defeated Simpson 1-0. Levi Mitchum pitched the shutout, held the Red Hawks to five hits, struck out 12. The only run of the game came in the seventh inning; RF Izaac Garsez hit an RBI single. Story from College of Idaho site.

Results from the TranSouth Conference tournament in Jackson, TN:

Results from the Sooner Athletic Conference tournament in Lubbock and Plainview, TX: