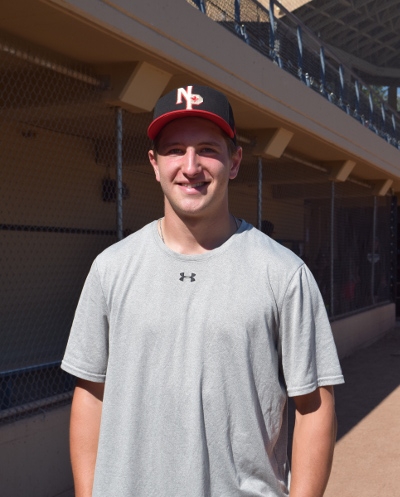 Sean Heppner is right-hand pitcher headed for his second season with the University of British Columbia Thunderbirds. He is currently playing for the Kamloops NorthPaws, a team playing its inaugural season in the West Coast League.

Bob Broughton, courtesyrunner.com: The British Columbia Thunderbirds made a remarkable turnaround during the last five weeks of the 2022 season, getting four quality wins at the Opening Round Tournament at Lewis-Clark State, and giving Lewis-Clark State, who eventually finished in second place nationally in the NAIA, a real scare. What explanation do you have for the turnaround?

Sean Heppner, Kamloops NorthPaws: We were a really young team. I think over half our team had never played a college baseball game before.

BB: That includes you?

SH: Yeah, including myself. So, just getting to know yourself, as you play the season, you get more comfortable and know which situations you're going to go into and getting the experience. Then, it just kind of all came together and we all kind of felt comfortable pitching and hitting and doing what we needed to to play. And we were having so much fun, which we weren't having for a long time.

BB: How many of those guys are going to be back next year?

BB: And you're coming back?

BB: And Noah Or and Ty Penner?

SH: Noah's coming back. He's taking a Master's program, so he's going to be a graduate. And Ty's obviously coming back if he doesn't get drafted.

BB: You're going into your second year. What are you studying?

SH: I'm in Geological Engineering right now. I'm actually going into my third year, but my second year of eligibility.

BB: Are you still living in Point Roberts,Washington?

BB: I can imagine that during the pandemic, that was kind of inconvenient. So, were you doing your classes remote?

SH: No, I lived on campus, so I didn't have to really worry about that, but my family was inconvenienced.

BB: So, are you both a U.S. and Canadian citizen?

BB: Well, that's kind of convenient. And did you play in the Premier League? For which team?

BB: That's Jeff Francis' team. Also, you're in very good company, being a U.S. citizen and playing for UBC. Fletcher Vynne, of Friday Harbor, WA, was a good ball player. And he has done very well for himself since graduating.

What's your impression, comparing the West Coast League to the NAIA? You're playing now both with and against a lot of Division I players.

SH: The hitters are definitely a lot better. In the NAIA, there are some guys where you can just straight blow them by with fastballs. These guys take a little bit better pitches and put some good swings on some of your better pitches, so you've got to be a lot sharper all the time.

BB: What's your impression of Kamloops so far?

SH: I really like it. I've been here before, just for tournaments, in the past. There's a lot of good stuff to do. Our host family is awesome.

BB: Were you recruited by anybody besides UBC?

SH: A couple of Division II schools and a JUCO. But neither of them had Engineering. And UBC was close and I had a pretty good relationship with the coaches, so it just made a lot more sense.

BB: One thing I'm going to sneak in here is, Lewis-Clark State has to come to Vancouver next Spring. The baseball fans in Vancouver should turn out for that.

SH: They definitely should.