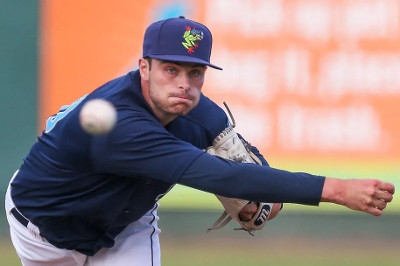 USA defeated the Dominican Republic 10-8 in the third and final game for both teams in the Premier12 qualifying tournament for the 2020 Olympics. The game was played at Estadio de los Charros de Jalisco in Guadalajara, Mexico.

USA led 7-2 after three innings, 8-3 after four innings, and it looked like this game was going to be a blowout. USA got a home run from LF/RF Mark Payton (Las Vegas Aviators) in the first at-bat of the game. SS Jake Cronenworth (Durham Bulls) hit a solo home run in the top of the second inning, and 3B Alec Bohm (Reading Fightin' Phils) hit a three-run home run in the third. 1B Edwin Espinal hit a two-RBI single for DR in the bottom of the second, and an RBI single in the bottom of the fourth.

C Eric Kratz (Scranton/Wilkes-Barre RailRiders) hit another solo home run in the top of the fifth, and then DR got back in it. SS Geraldo Perdomo (Visalia Rawhide) scored on a ground out. Then C Charlie Valerio (Akron RubberDucks) hit a three-run home run, and the score was 9-7 after five innings. Four runs were charged to submarine RHP Penn Murphy (Modesto Nuts).

At this point, the game changed character to a pitching duel. Neither team scored in the sixth and seventh innings. RHP Wyatt Mills (Arkansas Travelers), who throws sidearm, got it done for USA; two perfect innings, two strikeouts. He got through the sixth inning on seven pitches. He ended up getting the win. RHP Kelvin Gonzalez (Hickory Crawdads) allowed one hit and one base on balls over the same two innings. He was helped with a pickoff by Valerio to end the top of the seventh.

The final score could have been closer. In the top of the eighth, USA got a run on a defensive mistake. Kratz led off hitting a ball down the right-field line that the DR players thought was foul, and indeed, the first bounce was in foul territory. However, it was fair when it crossed first base, and the result was a double. The next batter, 2B Xavier Edwards (Lake Elsinore Storm), tried to bunt him over to third, but bunted foul for strike three, and USA wasted an out. However, Kratz scored on a single by CF/LF Jordon Adell (Salt Lake Bees). The throw to the plate by RF Oscar Gonzalez (Akron RubberDucks) had Kratz beat by two steps, but the catcher, Valerio, didn't hold on.

In the bottom of the eighth, Valerio lead off with a long ball to center field. He stole third, but was stranded there. RHP Noah Song (Lowell Spinners), who was throwing 96 MPH fastballs, recorded three strikeouts in the inning, including a three-pitch strikeout of Edwin Aspinal to end it. So, the score was 10-7 going into the ninth instead of 9-8.

USA went three up, three down in the top of the ninth. DR's bottom of the ninth started with two outs. Then 2B Otto Lopez (Lansing Lugnuts) kept DR alive with a single, then went to second on defensive indifference, and scored on a single by LF Alfredo Marte (New Jersey Jackals). However, DH Carlos Peguero (Tijuana) struck out to end the game.

Mexico and USA move on to the next round, in Tokyo. Play there starts November 11.