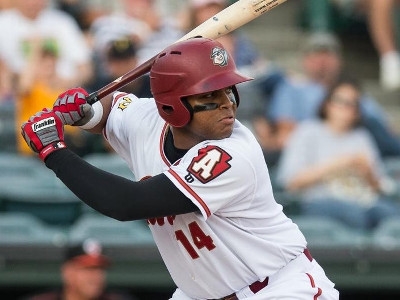 The Dominican Republic defeated The Netherlands 14-4 in a game halted by the mercy rule after seven innings. This was the second game for both teams in the Premier12 qualifying tournament for the 2020 Olympics. The game was played at Estadio de los Charros de Jalisco in Guadalajara, Mexico.

CF Roger Bernardina (Unión Laguna) of The Netherlands hit the first pitch in the bottom of the first over the fence. Four batters later, C Chadwick Tromp (Louisville Bats) hit a two-run home run, and The Netherlands had a 3-0 lead.

RF Carlos Peguero (Tijuana) and 3B Jason Guzman (Lexington Legends) also hit home runs, and the one by Guzman was way over the center field fence. Peguero finished the game 3-for-4, and 1B Edwin Espinal (Somerset Patriots) went 2-for-3 with three RBI and three runs scored.

Neither of the starting pitchers got through the third inning. The Netherlands used six pitchers, DR used four. RHP Henry Henry (Lake Elsinore Storm), who pitched part of the third and all of the fourth innings, got the win. RHP Orlando Yntema (Curaçao Neptunus) got the loss.

Both sides made some slick defensive plays, and each side got an out on a throw from the outfield to the plate. The defensive play of the game was make by Celestino, who made a great catch of a long ball in center field hit by Bernardina in the fourth inning. Video The Netherlands' Yurendell de Caster (Wildcats [Serie Latina Americana]) did a piece of base running that you don't see often. He drew a walk to open the bottom of the fifth inning. Two batters later, Tromp hit a long fly ball to center field. After it was caught, de Caster tagged up and ran to second.

Attendance: 5,132 (generous; there has been little local promotion of this tournament)