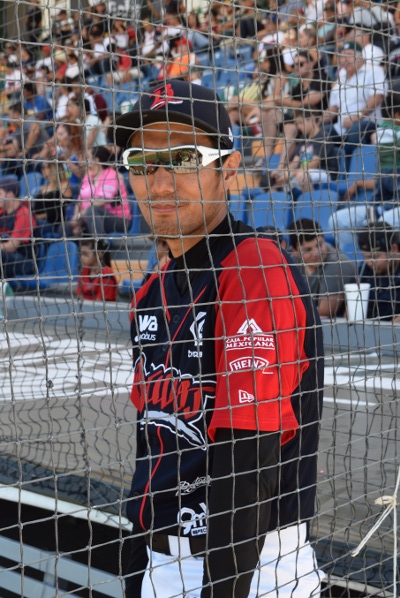 The Bravos de León (13-22) defeated the Saraperos (Serape Makers) de Saltillo (18-17) 7-4 at Estadio Domingo Santana in León on May 15. A lot of the Bravos games this season have been more like batting practice, but this was a good ball game.

It didn't start out that way. The Saraperos had a 2-0 lead before Bravos starter RHP Yasutomo Kubo recorded his first out. CF Juan Perez led off with a hit, and the next batter, 2B Manny Rodriguez, hit one over the left field fence. DH Jorge Vasquez followed with another hit, but Kubo got a break when the next batter, RF Rainel Rosario, hit into a well-executed double play. Kubo got out of the inning with his first strikeout of the game.

The Saraperos extended their lead to 3-0 with an RBI single by Vasquez in the third inning. In the top of the fourth, a balk was called on Kubo. He proceeded to hit the next two batters, loading the bases. However, he got out of the inning with another double play.

The Bravos got into the game in the bottom of the fourth. 3B Carlos Rivero started it with a double. He moved to third on a single by LF Felix Pie. Then, something unusual happened. RF Cedric Hunter hit what should have been a routine fly ball to left field, but it landed on the ground a couple of meters from the left fielder, Leandro Castro. Rivero scored, and Pie went all the way to third base. Pie then scored on a single by 2B Brandon Macias. The inning ended with a double play, and the Bravos trailing 3-2.

The Saraperos went three-up, three-down in the top of the fifth, with Kubo recording two strikeouts. The Bravos then took over the game with five runs in the bottom of the fifth. DH Carlos Lopez hit an RBI single. 1B Matt Clark followed with another RBI single, and CF Jeremias Pineda made a great dive at home plate when he scored. The next batter, Rivero, hit a ground ball to third, and the third baseman, Christian Zazueta, stepped on the bag for one out, and threw to first for the double play. However, Clark went to second, and scored on a close play at the plate on a single by Pie. Pie then scored on a triple by Hunter, which ended the night for Saraperos starter RHP Raul Carillo. Hunter scored on a single by Macias, and the inning ended with the Bravos leading 7-3.

The seventh inning started with a great play by SS Luis Medina on a ground ball by Rosario. The next batter, Castro, completed the scoring with a home run. The Saraperos got a double play for the first two outs in the bottom of the seventh. Then, Macias hit a ball to the mound. The pitcher, LHP Carlos Zuniga, got a glove on it, but the ball landed on the ground, an Zuniga lost track of it. When he finally picked it up, he made a bad throw to first, allowing Macias to go to second. The Bravos sent in a pinch-hitter, Eduardo Arredono. He hit a sharp ground ball to Rodriguez at second base, but Rodriguez made a great grab, and threw to first to end the inning. 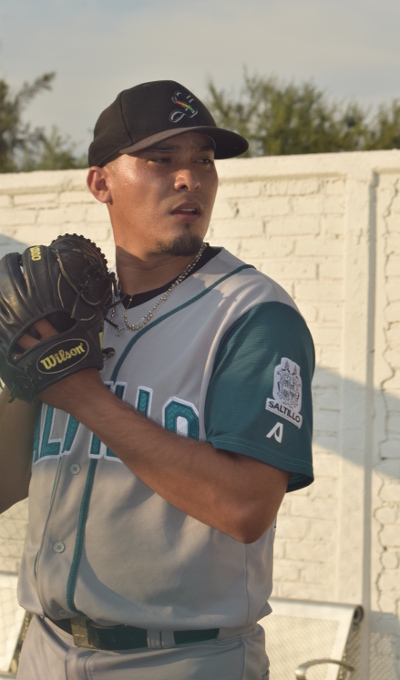 Kubo got another three-up three-down inning in the top of the eighth, getting two more strikeouts. He was replaced by RHP Manny Acosta in the top of the ninth, and things livened up a bit. Acosta struck out the first batter he faced, SS Josuan Hernandez, but that was because Hernandez swung at what should have been ball four. Acosta walked the next batter, then hit the one after that. However, the next batter hit a harmless fly ball, and Acosta struck out Perez to end the game, and get a save.

Macias finished the game 3-for-4 with two RBI. Vasquez went 2-for-4 with an RBI for the Saraperos. Kubo's numbers were eight innings pitched, four earned runs off nine hits, two strikeouts, and two hit batters, Carrillo, who allowed seven earned runs on 12 hits, got the loss.

Kubo (Kashihara, Nara, Japan) leads the Mexican League in strikeouts. He had a long career with three teams in Japan's Pacific and Central Leagues. He was the Pacific League's rookie of the year in 2005, and a Central League all-star in 2010. His numbers in Japan were 97-86, 3.70 ERA, 1,130 strikeouts, and 20 complete games. He went to the US last season, at the age of 37, and played for two independent league teams, the Gary Southshore Railcats, and the Sugar Land Skeeters. This is his first season in the Mexican League.

Rivero (Barquisimeto, Venezuela) played four games for the Red Sox in 2014. He played in Japan in 2017. He had a long minor league career with the Indians and several other teams. Lopez (Northridge, CA) played college ball at Cal State Fullerton. He was drafted by the Marlins in the tenth round of the 2013 draft, was in their organization through 2015. Pineda (Hormigo, Dominican Republic) was in the Red Sox and Twins organizations 2011-14. Acosta (Colon, Panama) played 103 games for the Braves 2007-09, then 130 games for the Mets 2010-12. His career numbers were 13-13, 3.99 ERA, 219 strikeouts.