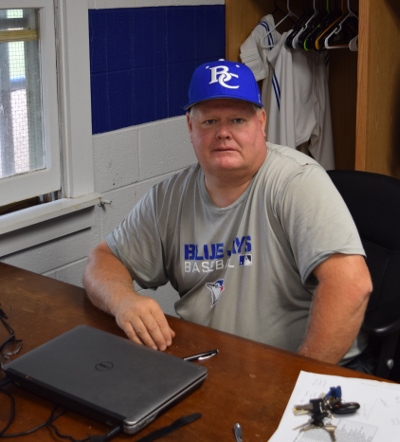 Mike White is the Head Baseball Coach and Athletic Director of the Bluefield College Rams. The Rams compete in the Appalachian Athletic Conference. Their record was 28-23 last season, 8-18 in conference play. This interview took place on October 7, 2018.

Bob Broughton, courtesyrunner.com: I'll start out asking you a couple of questions in your capacity as Athletic Director. It looks like there last been quite a bit of growth in athletics at Bluefield in recent years. You started football in 2012, right?

BB: So, what's the base of support for Bluefield, what's your fan base, where does the money come from?

BB: I was going to mention, sports at Bluefield College seem to go back a long ways.

MW: Football disbanded for World War II. In 2012, we brought it back. It made sense. It was the right time to come back. The community support has been awesome, and athletics at the college has grown exponentially over the last couple of years, especially.

BB: What other new sports have you added recently?

MW: Another one that made sense for us to go ahead and start was men's wrestling. This is a hotbed, especially with Grundy, VA, Blacksburg, Christiansburg, so we've added wrestling. We've started with our Junior Varsity programs, too. We've got such an interest in our main core sports, that we brought that on. We actually started JV football this year, JV baseball. We've had JV men's basketball, but the interest has been there, it's a growing place right now.

BB: How long has baseball been at Bluefield?

MW: A long time. This is my 14th season here. Before that, Billy Berry, who is at Tennessee Wesleyan, was here. So, there's some history here in the program, and I can remember, back as a player in the late 80's and early 90's, when I was at Virginia-Wise, Bluefield was playing then, so it goes way back.

BB: So, you played at Virginia-Wise. Where did you play after that? 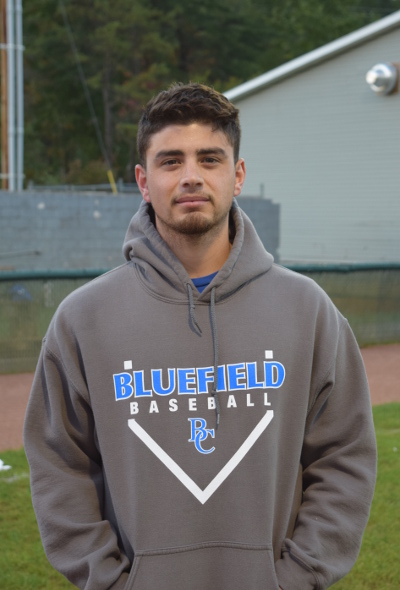 BB: Where did your coaching career start?

MW: My journey is a little different from most people. I went into the private sector. One of my roommates in college got into a company in the timber industry. So, I didn't get into coaching immediately after college. I stayed in that industry until about 20 years ago. I called up my old college coach, who was the Athletic Director at the time, Ray Spenilla, at Virginia-Wise. I told him I was ready to get back into it. He and Hank Banner, who is still the baseball coach at Virginia-Wise... I played with Hank from Little League all the way through college, actually... and he brought me onto his staff as an assistant, and I worked for him for about six years. Then I got the phone call from Billy Berry, who was here at the time, that he was leaving here to take the job at Tennessee Wesleyan, and one thing led to another, and in December of that year, I started here. Been a while. Doesn't seem that long ago, but 14 years is a long time.

BB: Now, you're one of those NAIA teams that has the luxury of playing in a minor league ballpark [Bowen Field]. What I've seen so far is, you have a very high-quality facility here.

MW: Yeah, we're very fortunate. When I got here 14 years ago, a gentleman by the name of George McGonagle... he's the President of the Bluefield Baseball Club... he was also the GM at the time...

BB: Is that the Appalachian League organization?

MW: It's an Advanced Rookie league. I developed a relationship with him and members of the baseball board, and that led to us being able to have more access to the facility. Like I said, I've been here 13 summers. I take care of the facility for them now, as far as the grounds, and they give us access to it and allow us to use it. It's been a blessing for us, because without it, we don't have a facility. The other part of it is, it's right beside our campus.

BB: Do you put the players to work doing groundskeeping, and stuff like that?

MW: We'll hire two or three of the players, that will stay back, maybe taking a summer class. We do some internships, too, with our sports management department. It's a pretty good gig for them, in the summer.

BB: The people who are reading this aren't going to be able to see it, but you've got a first-class locker room, audio-video facilities.

MW: That's pretty good for us. We haven't been in there yet, but we've got the indoor tunnel facility and weight room, so everything is right at their fingertips. It's a good place, it really is. We're very blessed, to be able to have it.

BB: Is that helping your recruiting?

MW: It does help. Obviously, in the league that we play in, with Tennessee Wesleyan and Bryan... we had four teams in the regionals last year, three of the four were in the regional championship. So, top to bottom, it's a very tough league. 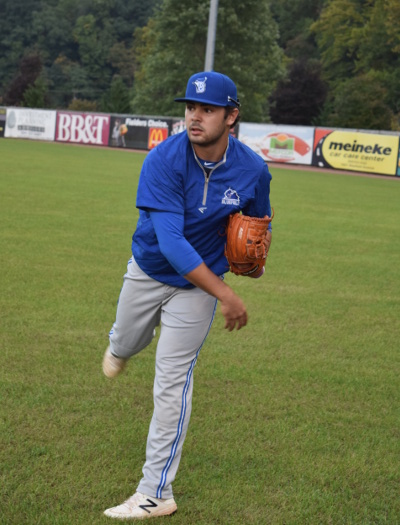 BB: I looked at your schedule for last year, and you had Emory and Henry, and Bluefield State, which is a three-wood shot away from here. I was wondering, looking to next season and future seasons, are you trying to get more games with the Division II and Division III teams in the area?

MW: Well, the Bluefield State one is the one that just makes sense for us, since we're so close to each other. Emory and Henry... last year was a terrible year for weather, and the head coach there, Trey McCall, who played in the Phillies organization... actually, Trey was the number one pick for the Phillies. We've known each other forever, he grew up in Abingdon, I grew up in a small town called Castlewood, which are about 20 miles apart. He needed a game, and I needed a game, so it just made sense that we play. But typically, we don't get many with Division III's because it's a different type of talent. For Division II's, because they use the points rankings, it hurts their points, so that kind of closes us out from getting the Division II games close to home.

BB: What about West Virginia Tech?

MW: We've played in the past, and it just hasn't worked out for us, and now that they've moved on over to Beckley, Lawrence Nesselrodt and I have talked, and we're going to renew that going into next year; we'll pick up a home-and-home with them.

MW: San Diego kid, one of those old school grinders. He's a second baseman by trade; out of necessity, he had to bump over to the other side last year and played shortstop for us. Good kid, plays hard, hits in the top of our order, runs well, really came a long way last year. We're excited for him. He's nicked up with an ankle injury right now. Hopefully, we'll get him back in the next week or so. We expect big things out of him.

MW: He had a good year for us as a freshman. Not a lot of true freshman come in and contribute immediately in our conference. He had his ups and downs, as typical freshmen will. There were days that he was real good, and days that he struggled. His stuff's good, he'll flash 91 or 92 MPH on occasion. His off-speed stuff's getting better, and that's going to be one of the keys to how successful he is; is he able to spin it or back it up a little bit? But we're excited for him. His Fall's been very good. He's gotten stronger. I'm excited that I've got him for three more years.

BB: Now, what about new guys that you're going to have this year? 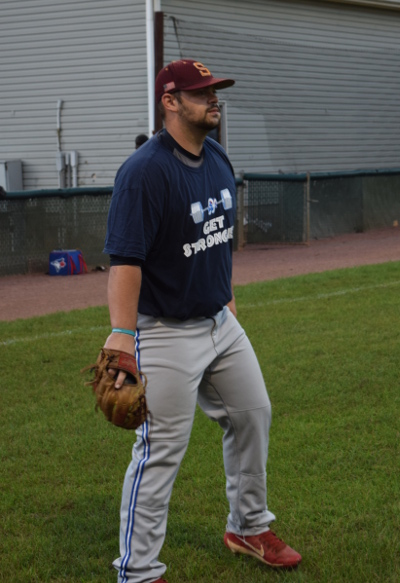 MW: We've got a slew of them. This is one of our bigger recruiting classes. We picked up Jordan Gonzalez as an outfielder from LIU Brooklyn. Division I transfer. We're excited to have him. LIU Brooklyn was an NCAA regional tournament qualifier last year. We got outfielder Jordan Huntley from Mount Olive. 1B/OF Edgardo Bernard from Monroe College (JUCO). We've got three Monroe kids, so we were excited to pick those up. IF Carlos Torres, Andy Peña. IF Ozzie Millet was a Marshall transfer that went to Mercer CC in New Jersey. On the mound, we picked up Steven Estep out of South Carolina-Salkehatchie (JUCO), left-hander. We also got Spencer Ambrose from Danville CC. He had 68 strikeouts last year in JUCO; left-hander. We've put together a strong class. Our league, top to bottom, is so tough. Everyone else... I know that Billy at Tennessee Wesleyan went out and reloaded. Clint McAuley at Bryan went out, got a good club... down at Point, they're doing a nice job. The teams in our league that are successful are the ones that on that bump are able to go out there and control people. And that's been our downfall the last four or five years. We just have not been able to establish ourselves on that mound well enough.

BB: When you're recruiting players... other than the facilities you've got here, what are your selling points?

MW: Small college setting, our campus is relatively small. We're not Virginia Tech, we don't have that size. We tell kids that if you're looking for a small college atmosphere, Christian college atmosphere, with a super baseball facility and a chance to get better, this is a good place to come to school. It doesn't fit everyone, and that's one of the things we tell them up front. It might not fit you, and if it doesn't, that's OK, but we're look for a certain type of kid to come in and is looking for a certain type of experience. We want them to be happy, and the big thing I talk to them about in the recruiting process is, don't be afraid to tell us "no". You get an opportunity to be selfish as a recruit right now. Be selfish. Make sure that we fit what you're looking for, as well as we think that you fit what we're looking for. We get great support from our administration; our president is on board with student athletes, and the faculty and staff do a great job with them, it's a true small college setting.

BB: Let's talk about the school a little bit. I remember when Bluefield was a JUCO, and you went to four years in 1975. Academically, what are Bluefield's strong majors?

MW: From an athletic standpoint, it's sports management and criminal justice. They're the two big ones. Business is also right up there, as one of our more important majors, and we just signed on... we do a thing now at Virginia Tech, with a match program for the medical school. The students will sign on with us for a year, then get into the new osteopathic school at Virginia Tech. So, we're growing and reaching out that way. But from an athletic standpoint, it seems like more of them gravitate toward criminal justice or sports management or sports medicine.

It's been good. When I came here 14 years ago, kind of like every other coach that had been here at that point in time, was going to stay here a little while, build a resumé, and bounce on out to someplace else, and the next thing you know, 14 years later, here you are. 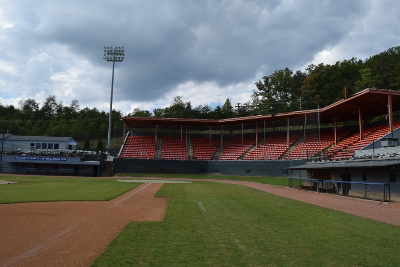