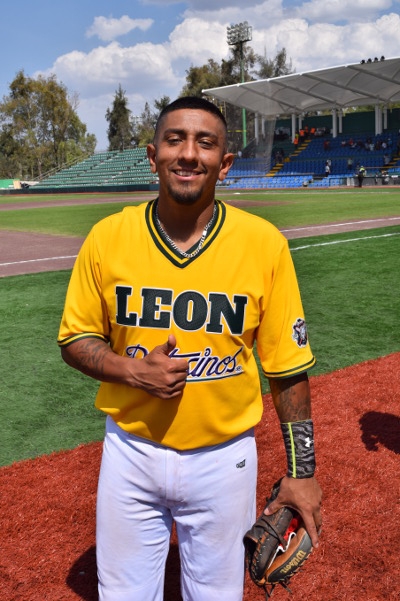 The Toros got only two hits the rest of the way. Villalobos was replaced by LHP Michaelangelo Guzman, who pitched two hitless innings. RHP Matt Nevarez pitched the seventh inning, allowed one hit, got the win. RHP Ricardo Gomez pitched the final two innings, allowed one hit, got a save. Quirarte got the loss. Martin finished the game 2-for-4. Munoz and Nunez both went 2-for-3. 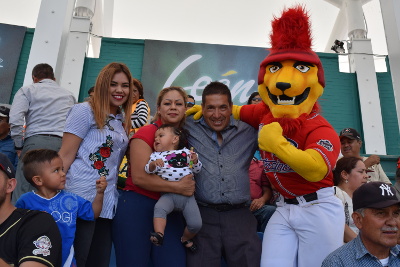 There are reviews of plays (jugado bajo revision) in the Mexican League, and one of these took place in the bottom of the second inning. With a man on first, a ground ball hit by Nunez was bobbled by the second baseman. The Toros claimed that the second baseman managed to touch second for the force out, but the review upheld the call on the field, that the runner was safe.

This was the third game of a three-game series; the Toros won the first two.

This was the first Sunday professional game played in León since 1991. The inauguration of the Bravos did not go smoothly. They played on the road for the first 2 1/2 weeks because the stadium (Estadio Domingo Santana, a.k.a. La Fortaleza) wasn’t ready. The inaugural home game was supposed to take place on April 18. They had inaugural ceremonies that night, but were unable to play a game because the lighting was insufficient. They played a double-header the next day, and some stadium scaffolding was blown down by high winds during the first game. Fortunately, there was only one injury; the ankle of a cameraman was damaged.

Ticket prices range from 90 to 600 pesos. I had a good seat that I paid 300 pesos for. I was able to park very close to the stadium for free. When you buy a beer there, they pour two 12-oz. bottles of Dos Equis or Tecate Light into a cup, and charge 70 pesos (about $3.50 US) for it. I heard that in at least one of the previous home games, Heineken, which comes from the same brewery, was also available. 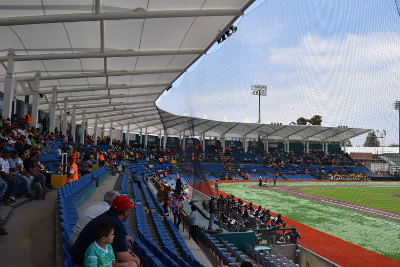 Nunez was in the Mariners organization from 2005 to 2009. Marte (Dominican Republic) played parts of the 2013 and 2014 season with the Diamondbacks, and played five games for the Angels in 2015. Noel (Lawton, OK) played for Coastal Carolina, was drafted in the fifth round in 2010 by the Padres, and played 15 games for the Yankees in 2015. Guzman (Salinas, CA) had a brief career in the Mariners organization. Nevarez (Mission Hills, CA) was drafted in 2005 by the Rangers, was later in the Rays organization. Gomez (Dominican Republic) was in the Pirates organization from 1997 to 2001.

Quirarte (Ventura, CA) played college ball at Cal State Northridge, and was in the Giants organization from 2008 to 2012; he was a fifth-round draft pick. Pena (Mission, TX) played for San Jacinto College, was drafted in the sixth round by the Red Sox in 2011, was in the Red Sox organization through 2014. Martin (Corpus Christi, TX) played for Sam Houston State, was in the Mets organization 2006-2014. Hankerd (Covina, CA) played for Southern California, was drafted by the Diamondbacks in the third round in 2006, was later in the Phillies and White Sox organizations. Liddi (Italy) played parts of the 2011, 2012, and 2013 seasons for the Mariners, and played for Italy in the 2017 World Baseball Classic, had four hits (two of them home runs) in 16 at-bats, and four RBI. Brown (Tampa, FL) played for Oklahoma State, played parts of the 2011-13 seasons for the Nationals, and three games in the 2014 season for the Red Sox.