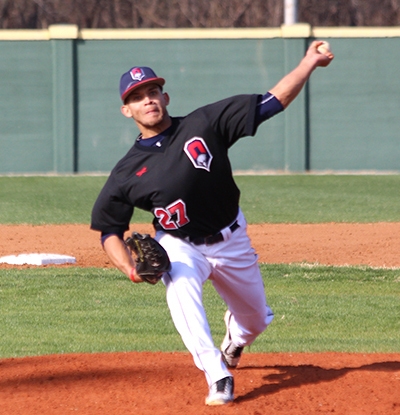 #1 Oklahoma City swept three games at Wayland Baptist, 7-2, 6-5, and 11-1. SS Garrett Foster hit an RBI double for the winning run in the first game. RHP Matt Young went the seven-inning distance for the win, struck out ten. 3B Shawn Corso's home run was the winning run in the second game. Corso also hit a sacrifice fly. RHP Mark Simon got the win. Story 3B Hunter Aguirre went 3-for-4 with a two-RBI triple and a double in the third game. RHP Roberto Delgado got the win. Story

#2 Faulkner lost a series to #16 Middle Georgia State two weeks ago, as well as a midweek game at #6 Tennessee Wesleyan. However, they won a series at Bethel, 9-10 (13 innings), 9-6, and 14-2. The Eagles led the first game 7-1 in the early going, but the Wildcats tied it with five runs in the bottom of the fourth, and the Eagles needed two runs in the top of the ninth to send it into extra innings. RF Colby Poston hit a home run in the bottom of the 13 to win it. Poston played the entire game, went 3-for-7. RHP Billy Price shut out the Eagles over the final three innings, got the win. Story DH Paolo Montezuma hit a two-run home run for the win in the second game, which ended a three-game losing streak for the Eagles. The Tigers did themselves in with six errors in the third game. RHP Israel Fuentes pitched eight innings, scattered eight hits, got the win. Story

The Eagles then got a 10-1 win over Talladega.

#3 Oklahoma Wesleyan swept three games at York, 13-4, 11-0, and 8-2. CF Chris Acosta-Tapia went 3-for-4 with a home run in the first game. LHP Carlos Aldana got a seven-inning one-hit shutout in the second game, struck out ten. Acosta-Tapia hit another home run. In the third game, three Eagles pitchers combined to hold York to four hits; RHP Blake Randazzo got the win.

The Eagles have a two-game lead over #12 Tabor and Friends in the Kansas Collegiate Athletic Conference. Acosta-Tapia leads the NAIA in slugging (.901) and has 18 home runs, third-best in the NAIA. Randazzo is tied with 11 other pitchers, including Nate Harmon of Southeastern, with nine wins. 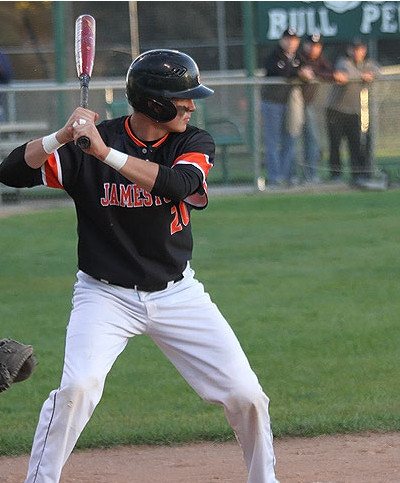 #4 Bellevue's 27-game winning streak ended with an 8-5 loss at Jamestown, but the Bruins won the remaining three games of the series 2-0, 18-3, and 10-2. The Jimmies scored five runs in the bottom of the ninth to win the first game, and the game ended with a three-run home run by C Quinn Irey. Brandon Radmacher, who struck out the only batter he faced, got the win. Colten Barnes pitched a seven-inning shutout in the second game, allowed four hits. SS Diego Iribarren hit an RBI double for the winning run, then scored the insurance run on a single by 2B Miles Campbell. Story The Bruins had 22 hits in the third game; 2B Miles Campbell went 3-for-5 with a home run, a double, and four RBI. RF Joe Moran hit a grand slam home run in the fourth game. Story

The Bruins have a one-game lead over #22 Mayville State in the North Star Athletic Conference. These two teams won't play each other this season, unless it's in the conference tournament. 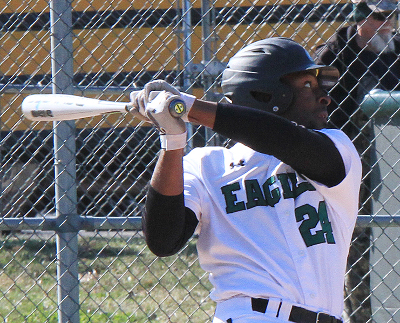 #5 Central Methodist swept four games at Evangel, 7-6. 8-6, 14-5, 15-14 (8 innings, scheduled for 7). The winning run in the first game came on a two-run home run by LF DeAndre Smith. DH Logan Haring went 3-for-3 with three RBI in the second game. RHP Dariel Chico pitched six innings, allowed six hits, struck out ten, got the win. Story The third game was close until the Eagles got seven runs in the sixth inning, led by a three-run home run by SS Zach Bechner, followed by a home run by Haring. Smith hit three home runs in the fourth game, including the winner in the bottom of the eighth; he finished the game 4-for-4. Andrew Thomas moved from second base to the mound to pitch the final 1 2/3 innings, didn't allow a hit, struck out two, got the win. Story

The Eagles have a slight lead over Benedictine in the Southern Division of the Heart of America Conference. Clarke has a four-game lead in the Northern Division.

#6 Tennessee Wesleyan lost two of three to Reinhardt, 0-1, 1-4, and 4-0. The only run in the first game came on an RBI squeeze bunt single by 3B Jacob Cagle. Both teams had four hits. The winning pitcher was RHP Enrique Zamora, who went six innings, struck out ten. Story LHP Blake Marbut got the win in the second game; he pitched six innings, allowed four hits. Cagle hit an RBI double for the winning run. Both teams also had four hits in the third game, but this time, LHP Chris Washington pitched a shutout. DH Alfred Cruz hit a sacrifice fly for the winning run. Story

The Bulldogs trail Point by one game in the Appalachian Athletic Conference.

#7 Keiser won two of three at #11 Southeastern, 7-3, 11-9, and 1-3. In the first game, C Brad Myott went 3-for-5 with a home run, a double, and three RBI. Story Myott batted in four more runs in the second game, finished 3-for-5 with a double. In the third game, RHP Nate Harmon went the distance for the Fire, allowed five hits, struck out ten. Story