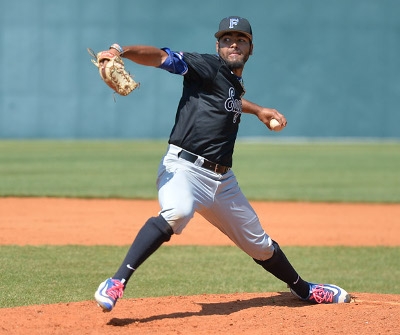 Zac Rinehart is second in the NAIA in hitting with a .476 average. The Grizzlies are hosting an Opening Round bracket May 17-20. video

#2 Bellevue won the North Star Athletic Association tournament. They hit eight home runs in the final against Mayville State, and won 14-1. LF Joe Moran hit two of the home runs. RHP Ben McKendall had a shutout going into the eighth inning before giving up a home run by LF Aaron Miller. The Comets had to play an "if necessary" game to get to the final, and ran out of pitchers in the seventh inning, when the Bruins scored ten runs. Story None of the games the Bruins played in the tournament were close. RHP Todd Nicks and RHP John Timmins combined for an 11-0 shutout over Waldorf; Nicks struck out 14. Story

#3 Lewis-Clark State won the NAIA West tournament, without giving up a single run. The defending champions defeated Corban 7-0, British Columbia 3-0, and C. of Idaho 5-0. RHP Kevin Hamann, RHP Noel Gonzalez (in relief), and RHP Connor Brogdon got the wins; Hamann went the distance. The game against British Columbia was probably the best of the three. It was scoreless until the eight inning, and a good pitching duel between RHP Curtis Taylor of the Thunderbirds (6 IP, 4 hits, 10 strikeouts, no walks) and RHP Quin Grogan of the Warriors (7 2/3 IP, 3 hits, seven strikeouts, three walks). The Warriors got the only run they needed on an RBI double by CF Logan Griffin, off reliever RHP Christian Botnick. LF Jacob Zanon completed the scoring with a solo home run. Story 1B Tyler McDowell went 4-for-4 with two triples and a stolen base in the game against C. of Idaho. Story

The Warriors are idle until the Baseball National Championship tournament May 27-June 3. Both the Thunderbirds (ISR #9, #1 in strength of schedule) and C. of Idaho (ISR #12) will be playing in the Opening Round.

#3 Faulkner won the Southern States Athletic Conference tournament, defeating #7 Auburn-Montgomery 11-4 in the final. The Eagles got four runs in the second inning, including a two-run home run by RF Nick Cain. They got the winning run in the next inning on an RBI single by 2B Dario Polanco. The star of this show was relief pitcher LHP Marco Blancard, who came on in the second inning after starter RHP Phil Anderson gave up four runs. Blancard went 5 1/3 innings, allowed only one hit, struck out six. LHP Ivan Pelaez pitched the final two innings, didn't allow a hit. Story The closest game the Eagles had in the tournament was a 7-3 win over Mobile. They still led all the way, and got away with four errors. Mark Vasquez got the win. Story

#5 Tennessee Wesleyan won the Appalachian Athletic Conference tournament, but they had to do it the hard way. They lost a game to Union C. (KY) (ISR #60) in the second round of the tournament, so they had to win four games over the next two days to win the tournament. On the final day, they defeated Union 11-2. TWC outhit Union by only 11-10. TWC got the winning run in the second inning on a two-run home run by C Luis Estevez. They put it away with seven runs in the sixth inning, which started with a two-RBI single by DH Chevis Hoover. Austin Goss got the win. TWC then defeated Point (ISR #37) 3-1 for the championship. The Bulldogs got all of their runs in the first inning, on an RBI double by SS Wardy Polanco, an RBI single by 1B Paolo Montezuma, and an RBI double by DH Adrian Gonzalez. Starter Reed Bright got the win, but the Bulldogs also got an excellent relief appearance by the same Chevis Hoover; 2 2/3 innings, one hit, and five strikeouts (one with the bases loaded). Story

Hoover was named the tournament MVP. LHP Ryan Hartman continues to have the lowest ERA in the NAIA, 0.56. He is 8-0, and has 110 strikeouts (ninth-best in the NAIA). The AAC is the host for the Opening Round bracket in Kingsport, TN. 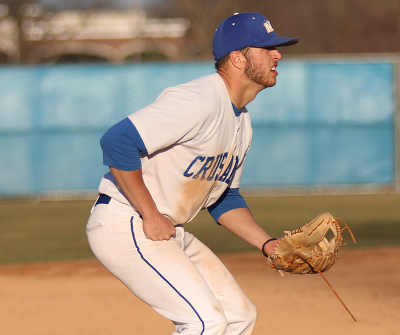 #6 Westmont went two-and-out in the Golden State Athletic Conference tournament, losing to Biola 4-2 and Menlo 9-3. The Master's (ISR #16) defeated Biola (ISR #38) 10-7 in the "if necessary" for the championship. The Mustangs trailed 7-6 going into the ninth inning, but C David Sheaffer hit a two-run home run to win it. Scott Savage got the win in relief; he pitched three innings allowed one run on two hits. LHP Conner Menez pitched a perfect ninth inning, got a save.

Westmont is hosting an Opening Round bracket.

Keiser (ISR #11) won their first-ever Sun Conference championship, defeating #25 Saint Thomas 13-5 in the final. C Brad Myott went 2-for-4 with a double and four RBI. RHP Kyle Keatts got the win, pitched the final five innings, allowed one run on two hits, struck out four. Keivan Berges, who pitched the first four innings, went 12-for-17 for the tournament. Story

#20 Madonna won the Wolverine-Hoosier Athletic Conference tournament by winning two of three against Indiana Tech (ISR #31). The Crusaders won the "if necessary" game 4-2. They got three of their runs in the fourth inning on an RBI triple by 1B John Lauro, a sacrifice fly by RF Taylor Grzelakowski, and a solo home run by 3B Levi Larmour (from Oakville, Ontario). The Crusaders' starter RHP Taylor Turner got the win, allowed four hits over 6 2/3 innings. Story 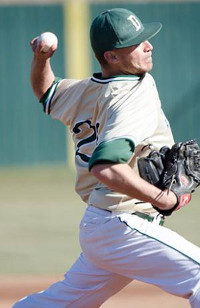 #16 Science and Arts of Oklahoma won the Sooner Athletic Conference tournament. Only the final against Wayland Baptist (ISR #36) was close. The Drovers won 4-2, on an excellent pitching performance by LHP Jordan Watson. He went eight innings, allowed two runs on five hits, struck out 15. Cesar Figuereo (from Azua, Dominican Republic) struck out the side in the ninth inning. Figuereo also hit an RBI single in the bottom of the third for the winning run. Story Watson leads the NAIA with 148 strikeouts.

More in this category: « Top 25 and recap for May 3 National Championship preview »