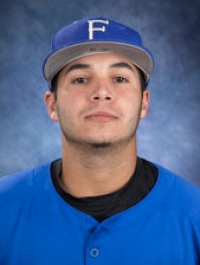 #1 Oklahoma Baptist swept Science and Arts of Oklahoma, 5-2, 2-0, and 3-0. Kelvin Rivas and Kyle Fimbrez held the Drovers to four hits in the first game. Rivas went six innings, struck out ten, but walked five. 2B Yariel Gonzalez batted in three of the Bison runs, starting with a two-run home run, and the winning run when he reached first on a fielder's choice. Story Jinny Parra pitched the seven-inning shutout in the second game, allowed six hits, struck out four. 2B Jeff Ricker and DH Yariel Gonzalez batted in the two runs for the Bison. Chris Gomez duplicated Parra's performance in the third game; seven-inning shutout, six hits, four strikeouts. C Garrett Gallacher hit an RBI double for the winning run. Story

The Bison are 25-0, 8-0 in Sooner Athletic Conference play. Rivas has 59 strikeouts, third-best in the NAIA. They visit non-NAIA Dallas Christian March 20-21. They play #4 Tabor at Wichita State March 24.

#2 Faulkner defeated Point in a mid-week game, 12-6, then swept Loyola-New Orleans, 8-3, 4-0, and 8-2. RF Nick Cain hit a three-run home run in the first game. Story Victor Arche pitched a seven-inning shutout in the second game. He allowed two hits, struck out nine, and didn't walk a batter. He faced the minimum number of batters; both of the baserunners he allowed were taken out by double plays. LF Alexis Torres and DH Randy Joung hit home runs. Kurt Lipscomb and Jack Charleston combined to hold the Wolf Pack to four hits in the third game. Torres hit a sacrifice fly for the winning run. Story The Eagles are 27-3, 11-1 in Southern States Athletic Conference play. They host William Carey March 20-21, and #5 Georgia Gwinnett March 24. 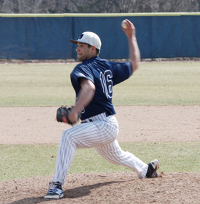 #3 Missouri Baptist lost two more games to weather, then ran off seven straight wins, five of them shutouts, over Lourdes, 14-1, 12-0, 6-0, and 4-3, and Hannibal-LaGrange, 5-0, 12-0, and 15-0. Joel Duggins, Ryan Stapp, and Maxwell Osnowitz combined for the first shutout against Lourdes. Brandon Zywicki went the seven-inning distance in the second one, allowed one hit, struck out four. The fourth game was a lot more competitive. The Spartans trailed 3-2 after four innings. The tied it 3-3 in the fifth inning, then won it with a sacrifice fly by 3B Jeff Smith in the bottom of the seventh and final inning. Smith batted in three of the Spartans' runs, hit a home run. Story These four games were Lourdes' first of the season; they lost six games to weather.

#4 Tabor swept Ottawa, 5-0, 4-2, 5-4, and 12-2. Jean Acevedo pitched a complete seven-inning shutout in the first game, allowed five hits, struck out six. The Braves came up with three runs on the top of the sixth, on home runs by C Kaylem Quinn and 1B Aaron Marshall to take a 4-3 lead in the third game, but the Blue Jays tied it in the bottom of the seventh on a wild pitch, then won it on an RBI ground rule double by CF Jerrik Sigg. Russell Longworth pitched the first six innings of the fourth game, allowed two runs on seven hits, and struck out 12. RF Pete Lelich batted .600 for the series, had seven RBI. Story The Blue Jays visit Kansas Wesleyan March 19, and host Kansas Wesleyan March 21. They play #1 Oklahoma Baptist at Wichita State March 24.

#5 Georgia Gwinnett lost a game to Campbellsville, 4-1, then swept two games against Rochester, 11-5 and 16-5. The Campbellsville game was a late addition because the Tigers had a road game rained out. Five Tigers pitchers combined to hold the Grizzlies to a run on seven hits. CF Ricky McColloch hit a bases-loaded triple for the Tigers. Story 1B Ty Abbott went 3-for-5 with a double and three RBI in the first game against Rochester. Abbott batted in three more runs in the second game, and RF Kyler Timmerman went 3-for-5 with four RBI. Story The Grizzlies host Ohio State-Lima March 19-21 (video), and visit #2 Faulkner March 24. 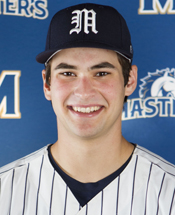 #6 The Master's took over first place in the Golden State Athletic Conference by sweeping #18 Concordia-Irvine, 6-3, 9-2, and 1-0. RF Tyler Krahn went 4-for-5 in the first game, scored three runs. LF Steve Karkenny went 2-for-4 with a double and four RBI. He moved to the mound in the ninth inning, struck out two batters, and got his eighth save of the season. Jason Karkenny pitched the first eight innings, allowed only one earned run, got the win. Story 1B Colin Nyenhuis went 3-for-five with three RBI in the second game. The third game was scoreless until the bottom of the seventh and final inning. Steve Karkenny hit a single, moved to second on a walk, stole third, and scored on a single by Nyenhuis. Conner Menez went the distance for the Mustangs, scattered eight hits, struck out six. Story