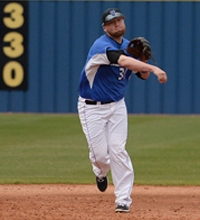 #1 Oklahoma Baptist is 19-0. They won three games against Southwestern Christian, 15-5, 2-0, and 5-3. 3B Landon Coon went 3-for-4 with a home run, a triple, and five RBI in the mercy-rule-shortened first game. Kelvin Rivas pitched a seven-inning shutout in the second game, allowed four hits, struck out ten. Dalton Judkins went the distance for the Eagles, allowed five hits, and both of the runs he allowed were on sacrifice flies, by 2B Yariel Gonzalez, of San Sebastian, Puerto Rico, and 1B Felipe Gonzalez. The Eagles out-hit the Bison 9-6 in the third game, and the tying run on second in the top of the seventh of a seventh-inning game, but Kyle Fimbrez got a strikeout to end it. Yariel Gonzalez scored the winning run on a sacrifice fly by Felipe Gonzalez.

Another scheduled game, against Cumberland, was rained out. Joey Szczepanski is batting .548 for the Bison. Rivas has 49 strikeouts, second in the NAIA. The Bison host Science and Arts of Oklahoma March 12, and visit USAO March 14.

#2 Faulkner swept Brewton-Parker, 6-4, 5-1, and 9-0. The Eagles trailed the first game 4-1 after six innings. They closed to 4-3 in the seventh, then tied it in the bottom of the eighth with an RBI bunt single by SS Edgar Figueroa. RF Nick Cain then hit an RBI double for the winning run. Christian Torres got the win in relief, faced four batters, struck out two of them. Story Victor Arche went the seven-inning distance in the second game, allowed four hits. 3B Dennis Morton batted in two of the Eagles' runs. Kurt Lipscomb pitched the three-hit shutout in the third game. The winning run came from an RBI single by Morton in the first inning. Story

The Eagles finished the weekend with an 10-4 win over #25 Campbellsville. Morton was 2-for-4 with four RBI. Starter Jack Charleston got the win, allowed eight hits in six innings. Story

#3 Georgia Gwinnett split two games with Madonna, 2-13 and 10-9, defeated Lindsey Wilson 6-4, and got two more wins over Roosevelt, 9-7 and 4-1. The Grizzlies were held to five hits by the Crusaders in the first game against Madonna. Crusaders starter Adam Prashad went six innings, allowed two runs on four hits, struck out 12. 3B Levi Larmour went 3-4 with a double and three RBI for the Crusaders. The Crusaders out-hit the Grizzlies 15-11 in the second game, but the Crusaders gave up three unearned runs. The game was decided by an bunt single by RF Kyler Timmerman, followed by a wild throw that allowed CF Trey Haygood to score. Tyler Oglesby, who had to come in with two outs in the top of the ninth to put out a fire, got the win by throwing three pitches. Story 2B Jareid Woods hit a two-RBI triple in the bottom of the eighth to win the game against Lindsey Wilson. Story 3B William Paschal went 3-for-3 with a double and three RBI in the first game against Roosevelt. Oglesby got his second win of the week in the second game against Roosevelt; he started, went five innings, allowed an unearned run and two hits, struck out four. Story

Timmerman and Ty Abbott, along with Mitchell Esser of Concordia-Irvine and William Barring of Westmont, have 29 RBI, tied for second in the NAIA. The Grizzlies host Rochester March 14, and Cumberland March 16 (video).

#4 Missouri Baptist lost two more games to weather, but managed to sweep Lindenwood-Belleville, 22-0, 7-2, and 9-3. The 22 runs in the first game were scored on only 16 hits. RF Eli Roundtree went 3-for-4 with a grand slam home run, a double, and five RBI. David Mullins pitched the two-hit shutout, struck out nine. The rout started with a five-run second inning. The Lynx came close to getting out of that inning unscathed. With two out and the bases loaded, 2B Aaron Collazo hit a popup that was caught in foul territory on the first base side. However, there was a patch of snow where the ball was caught, and the umpire ruled that the area was not playable. Collazo proceeded to clear the bases with a triple. Story Randy Wynne got the start and the win in the second game, pitched six innings, allowed two runs on four hits. C Hector Candelaria hit a three-run home run. Roundtree hit another home run in the third game, and LF Orlando Olivera hit two of them. Story

#4 Tabor started the week with a 16-2 win over Central Christian, then won three of four at York, 2-0, 7-2, 9-6, and 5-6. Dustin Hurlbutt pitched a three-hit shutout in the first game, struck out nine. The Bluejays' runs came from a two-RBI single by RF Tanner Bell. Jean Acevedo scattered ten hits in the second game, had a shutout going into the bottom of the seventh and final inning. CF Jerrik Sigg scored the winning run in the third game on a wild pitch. Sigg also had two hits and an RBI. The Panthers won the fourth game with a sacrifice fly in the bottom of the sixth by 3B Michael Johnson, who went 2-for-3 with a triple. Julio Angulo got the win.

#6 Concordia-Irvine and #11 The Master's are tied for the Golden State Athletic Conference lead. The Mustangs won two of three against Vanguard, but the Eagles were swept by #21 Westmont, 6-2, 5-3, and 7-4. Russell Harmening and Martin Taylor combined to hold the Eagles to five hits in the first game. Harmening went 7 1/3 innings, struck out seven. (Harmening's record is 6-1, 1.44 ERA, 47 strikeouts. He also just received a Cliff Hamlow Champions of Character Award.) Story In the second game, the Warriors got all the runs they needed in the first two innings. The winning run came on a two-run home run by SS Rudy Leon. The Warriors won the third game with a four-run second inning. It started with a home run by 3B Graylin Derke, and the winning run came on a two-RBI single by CF William Barring. The Warriors used six pitchers to hold the Eagles to six hits. Story

The Eagles and Mustangs play each other at The Master's March 13-14 (video).