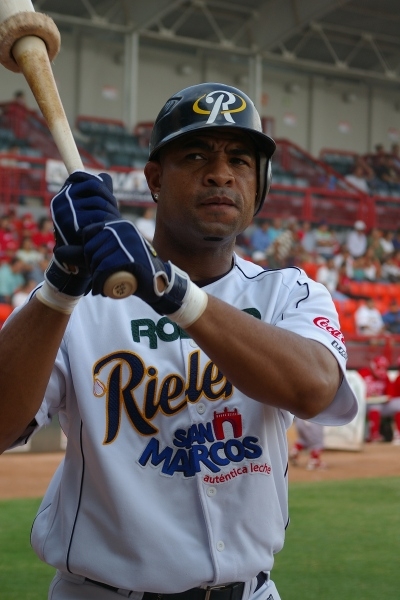 The Diablos Rojos (Red Devils) of Mexico City and the Rieleros (Railroaders) of Aguascalientes split a double header (two seven-inning games) before a good crowd in Aguascalientes.

First game: This was a good one. The Diablos led the game until the bottom of the seventh. RF Doug Clark got the Diablos on the board with a two-run home run in top of the first inning. They added two more runs in the second inning. LF Ivan Terrazas hit a single, and C Gabriel Gutierrez hit a double. Terrazas scored when SS Juan Carlos Gamboa reached on a fielder's choice.

CF Rubén Rivera made a good catch in center field on a ball hit by 1B Japhet Amador in the top of the third inning. The Rieleros got two runs in the bottom of the third. RF Carlos Peñuelas hit a leadoff single, and scored on a double by LF Oscar Lemus. 2B Ivan Bellazetin hit a bunt single, moving Lemus to third. Lemus scored on a single by 3B Jesse Castillo. The Rieleros added another run in the bottom of the fourth when Peñuelas hit a slash bunt to score Rivera, who had reached on a single. So, the Diablos led 4-3 after four innings.

The fifth inning was scoreless, but there was an unusual play in the bottom of the fifth. SS Carlos Orrantia reached on an error when a ground ball was booted by Gamboa at shortstop. Orrantia was caught off first base on a pickoff attempt, but after being forced to change direction several times, made it back to first safely. Diablos starter LHP Arturo Lopez made several more throws to first to keep Orrantia close, but eventually balked. Orrantia was stranded on second.

Each team got a run in the sixth. For the Diablos, DH John Lindsey hit a single, and 3B Emmanuel Avila hit a double. Terrazas was intentionally walked. C Gabriel Gutierrez hit a ground ball, but the Rieleros couldn't complete the double play, allowing Lindsey to score. In the bottom of the sixth, Rivera greeted reliever RHP Juan Sandoval with a double, and scored on a single by DH José Amador. 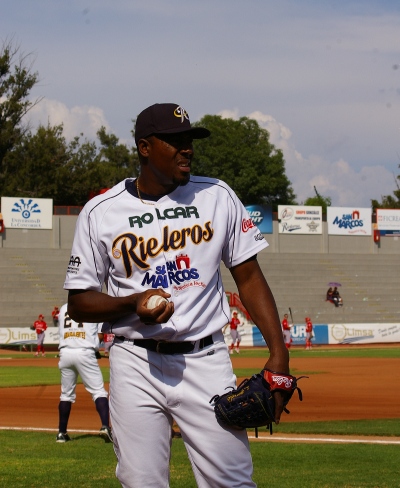 So, it was a one-run game going into the seventh. The Diablos missed a chance to get an insurance run when a ball hit by Clark was caught at the fence by Rivera. RHP Manny Acosta came on for the Diablos in the bottom of the seventh. Carlos Rodriguez came to bat as a pinch-hitter, and drew a walk. He was replaced by pinch-runner Cesar Del Angel. 2B Ivan Bellazetin bunted him to second. Orrantia hit a single, and Del Angel scored the tying run on a close play at the plate. Orrantia went to second on the throw. Castillo was intentionally walked. Then, 1B Willis Otáñez drew a walk, and the bases were loaded with one out, and Rivera was at the plate. Acosta got behind in the count 3-0. A strike and a foul ball took the count to 3-2. The final pitch was a ball, and the winning run was walked in.

Second Game: This time, the Rieleros opened the scoring, with an RBI double by 3B Jesse Castillo. The top of the second started with the third walk of the game issued by Rieleros starter RHP Jesus Bustamente. It was the second walk on four pitches, and the Rieleros had the bullpen going. RF Mario Valenzuela hit a single, then C Hans Wilson hit a two-RBI triple to center field. CF Rubén Rivera made a good leap for the ball, didn't come down cleanly, and the game stopped for several minutes for Rivera to shake it off. Wilson was stranded at third after an infield popup and a strikeout.

Rivera was replaced by Carlos Peñuelas in the top of the third. Bustamente walked the first batter of the inning on four pitches, and was replaced by Fredy Quintero. 3B Emmanuel Avila was robbed of a hit by LF Cesar Del Angel. This saved a run, because the next batter, 1B Japhet Amador, hit a two-run home run, giving the Diablos a 4-1 lead.

The Rieleros got one back on a solo home run by 1B José Amador in the bottom of the fourth. The Diablos added what turned out to be the winning run in the top of the fifth on an RBI single by Japhet Amador. The Rieleros answered with RBI singles by DH Willis Otañez and Peñuelas, and the score was 5-4 after five innings.

The Diablos added an insurance run in the top of the seventh on an RBI single by DH John Lindsey.The same Manny Acosta came on in the bottom of the seventh, and this time, the Rieleros went three up, three down on two ground balls and a popup.

RHP Juan Sandoval, who, like Acosta, appeared in both games, got the win in relief; he allowed one hit in 1 1/3 innings. Bustamente, who threw 54 pitches in his two-plus innings of work, got the loss. The Rieleros used seven pitchers, the Diablos five. 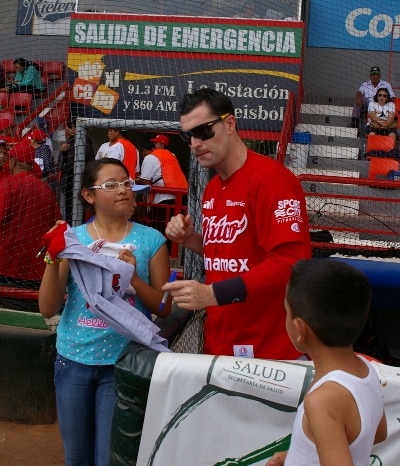 The usual ticket price for a reserved seat at Rieleros home games is about $9.50. This game cost $14.50 because it was a double-header. A beer in this ballpark costs $2.40.