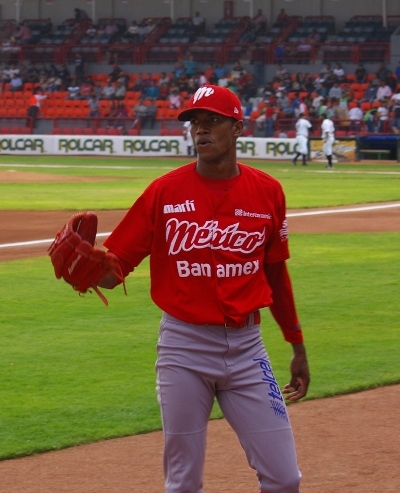 The Diablos Rojos (Red Devils) of Mexico City lead the North Division of the Mexican League by nine games, with a 62-35 record going into this game. The Rieleros (Railroaders) of Aguascalientes are in seventh place in the North Division, with a 44-52 record, and they will miss the playoffs. Tonight, however, belonged to the Rieleros.

The Diablos took the early lead in the top of the second, with a solo home run by 3B Emmanuel Ávila, and an RBI single by CF Carlos Figueroa. Figueroa bounced a line drive off Rieleros starter RHP Oswaldo Pacheco. (Pacheco got in the way of another line drive in the sixth inning, but was able to recover, pick up the ball, and get the out at first.)

The Rieleros answered with a solo home run by CF Rubén Rivera in the bottom of the second. It was his 20th HR of the season. C Oscar Lemus hit a ground rule double with two out, but a strikeout by Diablos starter LHP Marion Arias ended the inning.

Rivera made a good play in center field in the top of the third, taking away a home run from 1B Japhet Amador. The Rieleros tied the game 2-2 in the bottom of the third on an RBI double by SS Carlos Orrantia. Orrantia went to third on a wild pitch, then scored to put the Rieleros ahead for good on a fielder's choice by 3B Jesse Castillo. 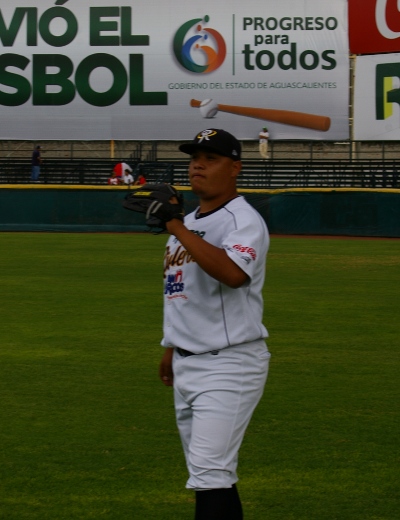 The Diablos were kept off the board in the top of the fourth with a good catch at the third base line by LF Oscar Lemus on a fly ball hit by SS Juan Carlos Gamboa. The Rieleros took over the game with five runs in the bottom of the fourth. The inning started with a leadoff walk by DH José Amador. The next batter, RF Carlos Peñuelas, bunted, but it wasn't placed well, and Amador was out at second. It didn't matter, because Peñuelas went to second on a wild pitch. Lemus and C Isidro Piña walked to load the bases. The first run of the inning scored when 2B Ivan Bellazetin reached on a fielder's choice, with Piña forced out at second. Then, Orrantia hit a two-RBI double. This chased Arias. His replacement, RHP Oswald Martinez, was greeted with an RBI single by 3B Jesse Castillo, who led the team going into this game with a .320 average. 1B Willis Otáñez followed with a hit, moving Castillo to third. Castillo then scored on a wild pitch, and the Rieleros led 8-2 after four innings.

The Diablos got one back in the top of the fifth when 2B Sergio Gastelum scored when 1B Japhet Amador reached on a fielder's choice. The Rieleros completed the scoring with two runs in the bottom of the fifth. José Amador hit a leadoff single, went to third on a single by Peñuelas, then scored on a bad attempt to pick off Peñuelas. Lemus then hit an RBI single, scoring Peñuelas.

There were two more good defensive plays in the top of the sixth. Rivera made another good catch in center field on a ball hit by Avila, and Pacheco made the play on a line drive mentioned earlier.

Pacheco went seven innings, allowed three earned runs on nine hits, struck out two, didn't walk a batter. Relievers Remberto Romo and Marco Campoy held the Diablos hitless the rest of the way. Orrantia finished the game 2-for-4 with two doubles, three RBI, and two runs scored. Figueroa went 3-for-5 with a double and and RBI for the Diablos; Arias got the loss. 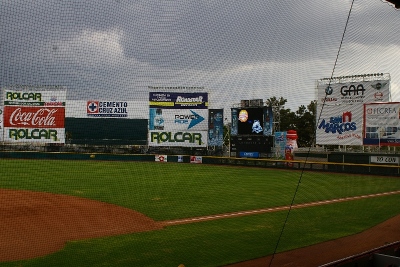 The Rieleros ' ballpark, Parque Alberto Romo Chávez, has dimensions of 340 feet down the first and third base lines, and 400 feet in center field. It was renovated in 2004. The dugouts protrude into the field, and when it rains (as it did tonight in the third inning), the players get wet, but the spectators don't.

This was the first game I've been to in a very long time where there wasn't a seventh inning stretch. The Diablos have a dance team, and they do a credible can-can.

There's a large Nissan plant south of Aguascalientes. Aguascalientes is supposed to become the second city in Mexico to have Nissan Leaf electric taxis, but I haven't seen one yet.