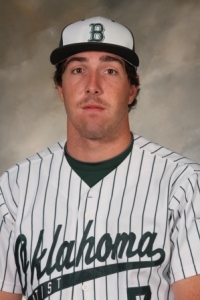 #1 Oklahoma Baptist swept Saint Gregory's, 18-11, 12-4, and 16-5. The first game was closer than the score indicates; both teams had twelve hits, and the Bison didn't put it away until they scored five runs in the top of the ninth inning. CF Joey Szczepanski went 4-for-6 with a three-run home run, five RBI, and four runs scored. 1B Steven Knudson hit two home runs in the second game, batted in three runs. Julian Merryweather got the win, went eight innings, allowed four runs on ten hits. Knudson got another home run in the third game, went 3-for-4 with three RBI and three runs scored. Jinny Parra got the win, allowed four runs on six hits, struck out seven. Parra's record is 6-1, 1.99 ERA.

The Bison then defeated now-Division II Rogers State 3-2 in twelve innings. Szczepanski hit an RBI double for the winning run in the 12th. Frankie Wright, who allowed one hit over the last two innings, got the win. Szczepanski had another double, was 3-for-6 for the game.

Merryweather is 9-2, 1.39 ERA, 91 K. The Bison have won 15 straight, and they won the Sooner Athletic Conference pennant. They are co-hosting the SAC tournament May 2-5. Live video The Bison play Mid-America Christian in the first round. #16 Oklahoma City plays Southwestern Assemblies of God.

#2 Lewis-Clark State dropped their first game against Division II Northwest Nazarene 11-10, then won the remaining three games 12-5, 9-0, and 1-0. The Warriors were charged with four errors in the first game. The Crusaders got the winning run on a sacrifice fly by CF Josh Hatfield in the eighth inning; Hatfield had three RBI's for the game. Aaron Vaughn got the win for the Crusaders, despite giving up eight earned runs on 14 hits over eight innings. The Warriors didn't over the second game until the seventh inning, when they scored four runs, two of them on a single by RF Cody Lavalli. CF Ryan Sells went 2-for-4 with a home run and four RBI. Ty Jackson and Nick Lemoncelli combined for the shutout in the third game. They allowed two hits apiece, and Lemoncelli struck out five in three innings of work. Lavalli, 1B Jacob Cano, and LF Zach Holley hit home runs. The only run of the fourth game came from an RBI double by DH Jake Shirley in the top of the ninth. The Crusaders loaded the bases in the bottom of the ninth, but David Murillo got a strikeout to end the game. Shirley was 4-for-5 for the game. J.T. Kaul, Beau Kerns, Joe Mello, and Murillo combined for the shutout; Mello got the win.

The Warriors finished the weekend with a 2-1 win in a non-conference game at nearby C. of Idaho. The Warriors' only runs came from a two-run home run by Jackson, playing first base in this one. Cody Chartrand got the win, went five innings, allowed a run on five hits. Gunnar Swanson and Michael Noteware held the Coyotes hitless the rest of the way.

Lavalli has 13 home runs, which ties him with seven other players, including Knudson of Oklahoma Baptist and Ruiz of Oklahoma Wesleyan, for second-best in the NAIA. (Forrest Smith of Oklahoma City leads the NAIA with 16.) The Warriors visit Division II Western Oregon May 2 and 4, and visit Linfield, ranked #1 in Division III, May 3. 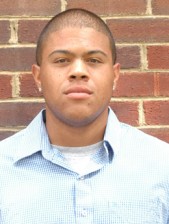 The Mid-South Conference tournament is May 4-7 in Columbia and Campbellsville, KY. (Live video available on the tournament page.) The Tigers play U. of the Cumberlands in the first round.

#4 Faulkner won the Southern States Athletic Conference pennant by winning two of three against Martin Methodist, 3-2, 5-8, and 14-2. The defending champions won the first game on a pinch-hit RBI single by Taylor Sasser in the bottom of the ninth. The Eagles trailed 2-1 going into the bottom of the eighth, but another pinch-hitter, Elvis Rodriguez, hit a home run to tie it. Labradford Griffis, who became the pitcher of record by pitching the ninth inning, got the win. Jay Gause, Patrick McGrady, and Griffis combined to hold the RedHawks to three hits. The Eagles out-hit the RedHawks 10-5 in the second game, but the RedHawks got two big unearned runs in the top of the fifth to win it. RF Michael Cruz hit two three-run home runs in the third game. Thomas Dorminy got the win, pitched six innings, allowed two runs on seven hits, struck out ten.

Dorminy has 105 strikeouts, which puts him in a tie for sixth place in the NAIA. Robert Llera is batting .436 for the Eagles. The SSAC tournament will be in Montgomery, AL April 30-May 3. Live video The Eagles will play Auburn-Montgomery in the first round.

#5 Oklahoma Wesleyan swept four games at Central Christian, 23-0, 10-1, 9-4, and 15-6. Diego Ibarra and Andrew Smith combined for a mercy-rule-shortened shutout in the first game. 2B Jose Ruiz went 4-for-4 with a home run and six RBI. RF Will Price went 2-for-3 with a home run, a double, and five RBI in the fourth game.

#6 Georgia Gwinnett defeated Division II North Georgia 6-5. 1B Sloan Strickland hit an RBI single in the bottom of the ninth to win it. Zeke McGranahan, one of 16 seniors on the Grizzlies' roster, got the win by pitching a hitless ninth inning. Tyler Carpenter pitched the first seven innings, struck out ten.

The Grizzles then won two of three at non-NAIA Toccoa Falls, 19-4, 8-1, and 4-7. They trailed in the first game 4-2 after five innings, but erupted with 11 runs in the top of the sixth. 3B/1B Robbie Payne hit both a three-run and a solo home run in that inning. RF Jake Fields and 3B Eli Green hit home runs in the second game. The Grizzlies had an early 4-2 lead in the third game, but were shut down over the final four innings by Justin Key, who went the seven-inning distance for Toccoa Falls. Key also helped his cause at the plate with a two-run home run.

The Grizzles are the top seed in the Association of Independent Institutions tournament, May 2-5 in Lynn, MA. They will play Houston-Victoria in the first round.

#7 San Diego Christian swept a double-header at Biola 8-3 and 16-0 to win the Golden State Athletic Conference pennant on the final day of the regular season. The Hawks lost to the Eagles 5-4 the previous day on a two-run home run by DH Boone Farrington in the the bottom of the ninth. Garrett Picha went the distance for the Eagles, allowed ten hits. #12 The Master's defeated #24 Westmont 13-3 at the same time, putting the Hawks and Mustangs in a tie for the conference lead going into the final day. The Mustangs won the first game of their double-header 2-0 (Tommy Kister and Steve Karkenny combined for the shutout, SS Jonathan Popadics hit a two-RBI double for the only runs of the game), but lost the second game 8-4.

1B Taylor Eichhorst hit a two-run home run in the first game of the Saturday double-header. LF Chad Erickson also hit a two-run home run, and got another RBI by drawing a bases-loaded walk. Gabriel Hemmer got the win, and his record is now 11-3, 3.14 ERA, 107 K.) Eichhorst hit two more home runs in the second game, one for two runs, the other solo. Joey Aquino and Jake Sween combined for the shutout.

Courtesyrunner.com will provide first-hand coverage of the Opening Round Tournament, Santa Clarita Bracket.

More in this category: « Top 25 and recap for April 22 Santa Clarita Opening Round Bracket, day 1 »