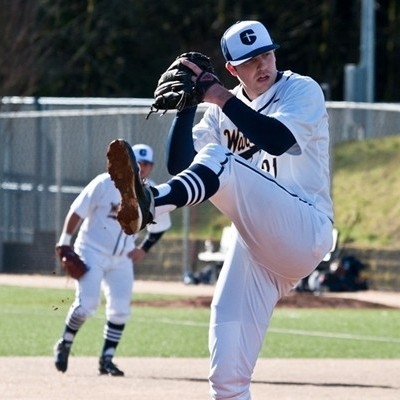 #1 Oklahoma Baptist swept Southwestern Assemblies of God, 17-0, 6-2, and 14-0. Jordan Morales, Tallen Parker, and Jeff Gunter combined for the shutout in the first game. Morales got the win (he is 10-0, 1.96 ERA for the season), pitched five innings, allowed three hits, struck out six. Jinny Parra got the win in the second game. RHP Julian Merryweather and Andrew Millner got the mercy-rule-shortened shutout in the third game. Merryweather pitched six innings, allowed two hits, struck out six. 3B Garrett Roberts went 3-for-3 with an RBI and three runs scored.

#2 Faulkner completed their season sweep of #6 Georgia Gwinnett, winning the third game of the season 5-4. The defending champions led 3-0 after four innings, and 5-1 after seven, but the Grizzles scored three runs in the top of the ninth to make it interesting. The Grizzlies had the tying run on third, but Kurt Lipscomb got a strikeout to end it. Jay Gause got the win, pitched 6 1/3 innings, allowed a run on four hits, struck out 11. SS Dauris Holguin went 2-for-3 with a double and an RBI.

The Eagles won two of three at Southern Wesleyan, 5-3, 8-1, and 6-7. In the first game, each team scored three runs in the first inning, but Jeremy Holcombe and Patrick McGrady held the Warriors off the board the rest of the way. RF Michael Cruz scored the winning run on a ground out; he was 1-for-4 with three RBI for the game. Thomas Dorminy got the win in the second game, pitched five innings, allowed no runs on two hits. The Eagles led the third game 6-1 going into the bottom of the ninth, but the Warriors came up with six runs in the bottom of the ninth to win it. The comeback was led by a bases-loaded triple by CF Michael Hyman. Two hit batters and a walk tied it, and 1B Stephen Wyatt scored the winning run on a bunt single by SS J.J. Julian. Matt Craig Went the distance for the Warriors, recorded seven strikeouts.

Robert Llera is batting .442 for the Eagles. The Eagles lead the Southern States Athletic Conference by 1 1/2 games over #15 Southern Polytechnic, and two games over #10 Brewton-Parker. The Eagles host Martin Methodist April 24-25. Live video

#3 Lewis-Clark State won three of four against Corban (ISR #21), 0-5, 4-3 (13 innings), 5-2, and 12-4. Jacob Kopra pitched the shutout for Corban in the first game. He allowed five hits, struck out one, and walked three. He is 9-0, 1.44 ERA, 64 K, and this was his third shutout of the season. 1B Daniel Orr hit a sacrifice fly for the winning run in the first inning, went 4-for-4 with a double and two RBI for the game. Corban led the second game 3-1 after five innings, but were kept off the scoreboard the rest of the way by Gunnar Swanson (4 1/3 IP, 4 hits, 8 K) and David Murillo (3 2/3 IP, 3 hits, 7 K); Murillo got the win. Two of his strikeouts came after he entered the game with one out in the top of the tenth, and runners at second and third. L-C State tied it with two runs in the bottom of the sixth with an RBI single by C Jake Shirley and a sacrifice fly by CF Ryan Sells. Sells scored the winning run on a wild pitch. Corban won a 15-inning game against British Columbia the previous weekend. Story Corban out-hit L-C State in the third game 8-7, but three of L-C State's hits were two home runs and a triple by RF Cody Lavalli; he batted in two runs, and scored two more. Beau Kerns got the win in relief, pitched four innings, allowed no runs on two hits. Sells went 2-for-3 in the fourth game with a home run, three RBI, and three runs scored.

Lavalli has 11 home runs, which ties him with four other players for fifth-best in the NAIA. (Forrest Smith of Oklahoma City leads the NAIA with 15.) L-C State visits Division II Northwest Nazarene April 24-26, and plays a non-league game at nearby C. of Idaho (ISR #23) April 27. Corban finished in a three-way tie for third place with C. of Idaho and Concordia-Portland in NAIA West; the NAIA West tournament will be in Vancouver May 2-5.

#4 Georgetown C. (KY) swept Campbellsville, 7-6, 13-6, and 8-5. Georgetown needed four runs in the eighth inning to win the first game. Campbellsville responded with an RBI triple by DH Alex Kline to make it a one-run ball game, but the next batter lined out, stranding Kline on third. Leonard DeLaRosa got the win in relief, and RF Tyler Coker batted in three runs. DH Edwin Santiago hit a grand slam home run in the second game for Georgetown. Georgetown scored three runs in the bottom of the sixth to win the third game; pinch-hitter Trey Gross hit a two-RBI triple for the winner, and CF Duran Elmore hit an RBI double for the insurance run. 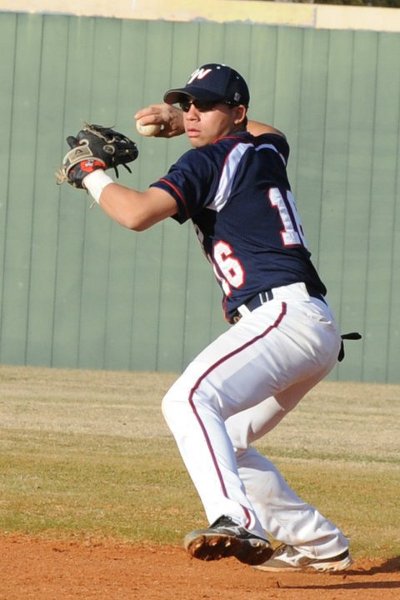 #5 Oklahoma Wesleyan swept four games at Central Baptist, 3-1, 20-5, 7-5, and 17-8. Diego Ibarra got the win in the first game, pitched eight innings, allowed one run on six hits. LF Jose Ruiz, of Barquisimeto, Venezuela, batted in two of the Eagles' runs, hit a home runs and a double. Ruiz went 5-for-5 in the second game, with a double and four RBI. The Eagles won the third game with two runs in the top of the ninth, 2B Jeff Butler stole home for the winning run, and RF Garrett Easton hit an RBI single for the insurance run. 1B Cody Riley hit a three-run home run and a two-RBI single in the fourth game.

Ruiz is batting .406, with 68 RBI. Ibarra is 9-1, 1.65 ERA, 61 K. The Eagles finish their regular season at home against Central Christian April 25-26. The Eagles have clinched the Midlands Collegiate Athletic Conference pennant. The MCAC tournament starts April 30.

The Grizzlies host Division II North Georgia April 23 (Live video), and finish their regular season at non-NAIA Toccoa Falls April 25-26. They will compete in the Association of Independent Institutions tournament, which starts in Lynn, MA May 2.

#7 San Diego Christian defeated #22 Concordia-Irvine 15-1, then lost the next two games of the series 7-1 and 1-0. 3B Jeff Lusardi went 5-for-6 with two runs scored for the Hawks in the first game. Andrew Brooks went the distance for the Eagles in the second game, didn't allow a run after the first inning, and pitched his way out of several jams. He scattered ten hits, struck out six, didn't walk a batter. CF Mitchell Esser hit a solo home run, went 2-for-4 with an RBI. Gabriel Hemmer got the loss. Keegan Yuhl went the seven-inning distance for the shutout in the third game, allowed three hits, struck out seven. JoeyAquino went the distance for the Hawks, and allowed only two hits, but one of them was a home run by LF Matt Moynihan. Aquino had a no-hitter going prior to this home run.

The Hawks lead #12 The Master's by one games in the Golden State Athletic Conference, and lead Concordia and #18 Westmont by two games. The Mustangs split two non-conference games with Cal State San Marcos (ISR #12). They complete their regular season at Westmont April 25-26. Live video The Eagles finish their regular season at Vanguard (ISR #9) April 25-26. The GSAC tournament starts May 1 at a location to be determined. 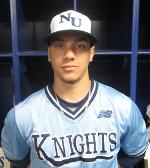 Virginia Intermont has played their last home game. The Cobras were shut out by Reinhardt in the final two games of the series, but won the first game 8-7, in 19 innings. The Eagles used 11 pitchers, the Cobras 5. The Eagles used 28 players, the Cobras 27. SS Fabian Placencia hit a sacrifice fly for the winning run. Placencia had ten at-bats, went 2-for-6 with an RBI, a run scored, and a stolen base.Daniel Wagner faced three batters in the 19th inning, got the win.

Northwood (TX) has also played their last home game. The Knights split a double-header with Texas Wesleyan, losing the first game 10-7, and winning the nightcap 10-5. The final run scored was a solo home run by SS Jessue Alvarado. He went 2-for-2 with three runs scored. Cody Faulkner got the win, pitched 5 1/3 innings, allowed four earned runs on eight hits, struck out eight. The Knights have two wins against Oklahoma City this season, and a win against Oklahoma Baptist.

Courtesyrunner.com will provide first-hand coverage of the Opening Round Tournament, Santa Clarita Bracket.