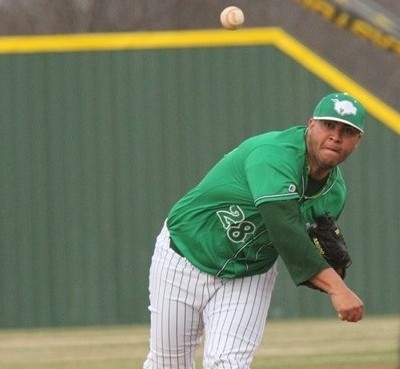 #1 Oklahoma Baptist won two of three at Texas Wesleyan, 3-4, 13-1, and 13-0. The Rams took advantage of five Bison errors to score three unearned runs in the first game. Sam Martin went the seven-inning distance for the Rams, allowed six hits, walked four. Martin is 6-1, 2.17 ERA. C Garrett Gallacher went 2-for-3 with three RBI and a double in the second game. He is batting .444 for the Bison. Jordan Morales got the win, went five innings, allowed three hits, struck out five. He is 8-0, 2.03 ERA. Kelvin Rivas and Andrew Milner combined for a mercy-rule-shortened no-hitter in the third game. Rivas pitched the first five innings, struck out four and walked two. Milner retired all six batters that he faced, struck out four of them. RF Tyler Melton went 2-for-3 with a double and three RBI.

#2 Lewis-Clark State swept Concordia-Portland (ISR #21), 7-4, 6-0, 8-7 (10 innings), and 14-6. The Warriors got away with five errors in the first game; only one of the Cavaliers' runs was earned. The game was tied 3-3 after three innings, but Steve Thompson held the Cavaliers to two hits in a five-inning relief appearance, got the win. CF Ryan Sells hit an RBI single for the winning run. Michael Noteware pitched eight shutout innings in the second game, scattered seven hits, struck out seven. Noteware is 4-0, 0.99 ERA, 48 K. The Warriors trailed the third game 6-0 after 2 ½ innings, but tied it with six runs in the bottom of the third. RF Cody Lavalli hit the second pitch of the tenth inning over the left field fence to win it. The fourth game was tied 4-4 at the seventh-inning stretch, but LF Tariq Staton hit a grand slam home run in the bottom of the seventh to break it open.

The Warriors have opened up a three-game lead over British Columbia (ISR #2) in NAIA West. The Warriors visit Simpson April 12-13.

#3 Faulkner lost two of three against #15 Brewton-Parker, 3-5, 5-3, and 1-8. Mike Venturelli went eight innings for the Barons in the first game, allowed three runs on eight hits, struck out nine. Venturelli is 4-1, 2.05 ERA. The defending champions won the second game on a two-run, ninth inning home run by 2B Luis Sanchez. Labradford Griffis got the win in relief, allowed one hit over the final 1 2/3 innings. In the third game, Kory Brooker pitched six innings of a seven-inning game, allowed one run on five hits, struck out four.

The Eagles continue to lead the Southern States Athletic Conference, but they lead #11 Belhaven by only one game, and the Barons by 1 1/2 games. They host Auburn-Montgomery April 11-12, and #5 Georgia Gwinnett April 15-16. Live video

#3 Missouri Baptist won two games against Benedictine, 5-0 and 8-3, and a third scheduled game was rained out. Dave Mullins pitched a complete seven-inning shutout in the first game, allowed three hits, struck out six.LF Orlando Olivera hit a home run for the winning run in the second game. 1B Dan Harper and C Erik Garcia also hit home runs. Brandon Zywicki got the win, and his record is now 9-0, 2.76 ERA. 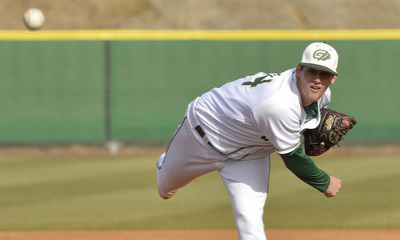 #5 Georgia Gwinnett won two of three against LSU-Alexandria (ISR #19), 12-2, 11-10, and 8-10. Tyler Carpenter pitched a mercy-rule-shortened one-hitter in the first game, struck out five. CF/RF Jake Field hit a three-run inside-the-park home run. The winning run in the second game came when DH Robbie Payne drew a bases-loaded walk. Payne went 4-for-5 with two RBI and three runs scored. Grizzlies starter Brandon MacKinnon had a no-hitter going into the sixth inning of the third game, and the Grizzlies had a 6-0 lead. However, the Generals scored seven runs in the top of the eighth inning. Pinch-hitter Justin Crowell hit a two-run home run for the winning run.

The Grizzlies got another win at Cumberland (ISR #23), 5-3. Payne hit a sacrifice fly for the winning run, had a hit and another RBI in the game. Sheldon Connor got the win; his record is 7-0, 4.17 ERA.

#6 San Diego Christian re-took first place in the Golden State Athletic Conference by sweeping Arizona Christian, 4-3, 6-3, and 5-2. All of the scoring in ther first game was in the first four innings. Courtesy runner Chris Gonzalez scored the winning run on a ground out by SS Christian Johnson. David Johnson got the win, pitched seven innings, allowed six hits, two earned runs. The Hawks got all the runs they needed in the first inning of the second game. RF Peter Hoyt hit a two-RBI single for the winning run. Gabriel Hemmer got the win, went 7 2/3 innings, allowed two earned runs on five hits. Steven Bunnell got a save, then got the win in the third game. He pitched two shutout innings in relief, allowed three hits. The game was tied 2-2 going into the seventh and final inning; the Hawks got the winning run on an RBI double by 3B Jeff Lusardi, then added two insurance runs with an RBI single by 1B Taylor Eichhorst and an RBI double by RF Michael Stowers. Stowers was 3-for-4 for the game.

Lusardi has 43 RBI. Hemmer has 91 strikeouts, second-best in the NAIA. He is tied with Missouri Baptist's Zywicki and three other pitchers with nine wins, best in the NAIA. The Hawks host #14 Vanguard April 11-12. Live video 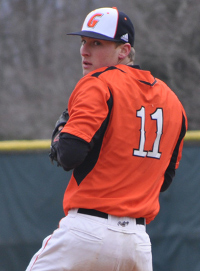 #7 Georgetown C. (KY) swept Saint Catherine, 4-3, 5-2, and 6-1. 1B Martin Lemus hit an line drive for a sacrifice to score the winning run. Tyler Arthur got the win, pitched seven innings, allowed two runs on eight hits. Lemus hit a three-run home run for the winning run in the second game; it was his eighth home run of the season. Brian Barry went the seven-inning distance for the Tigers, allowed four hits. Shaun Meyer pitched a gem in the third game; went the nine-inning distance, allowed four hits, struck out eight.

The Tigers visit non-NAIA Miami-Hamilton April 9, and U. of the Cumberlands April 11-12.