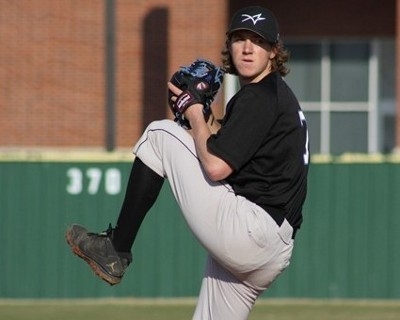 #1 Lewis-Clark State swept #8 College of Idaho, 8-0, 6-2, 10-2, and 9-3. Michael Noteware, Colton Wright, and Joe Mello combined for a one-hitter in the first game; Noteware went six innings, allowed the only hit, struck out five. The four Coyotes' runs in the second and third games came from two two-run home runs by SS Mitch Skaggs. Dillon Keene got the win in relief in the fourth game, allowed one hit in two innings. The Warriors visit Menlo March 21, 22, and 24.

#2 British Columbia swept a four-game series at #6 Concordia-Portland, 3-1, 11-2, 2-1, and 14-6 (12 innings). Sean Callegari got the win in the first game, went seven innings, allowed one run on five hits, struck out eight. The Thunderbirds got all the runs they needed in the second game in the second inning, with a bases-loaded triple by 2B Matt Spillman. Conor Lillis-White got the win, allowed one hit in five innings. C Cam Firth hit an RBI double with two out in the top of the ninth for the winning run in the third game. Curtis Taylor got the win, pitched a perfect eighth inning. Bryan Pawlina pitched the first seven innings, allowed one run on three hits, struck out eight. It took the Thunderbirds 12 innings to complete the sweep. They left the go-ahead run on third in the top of the ninth. Curtis Taylor got the Thunderbirds out of a jam in the bottom of the ninth. He was greeted with a double by SS Christian Lichtenhale. Taylor struck out the next batter, then got a ground out, which moved the potential winning run to third base. Taylor intentionally walked the next batter, and struck out the one after that to send it into extra innings. The Cavaliers ran out of pitchers in the 12th inning.

The NAIA West has a legitimate pennant race, as both British Columbia and Lewis-Clark State have 6-2 records. The Thunderbirds host non-NAIA Thompson Rivers on March 19, and Oregon Tech March 22-23. 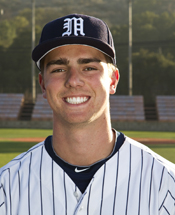 #3 The Master's has a ½ game lead over #4 San Diego Christian in the Golden State Athletic Conference, and a 1 ½ game lead over #5 Concordia-Irvine. The Mustangs won two of three at Biola, 8-5, 4-6, and 7-1. The Eagles had a 5-0 lead in the first game after three innings, but were shut down the rest of the way by Jason and Steve Karkenny. Jason got the win, and his record is now 7-0. All of his wins were in relief, and his ERA is 1.39. Steve hasn't allowed an earned run in 14 innings pitched this season. C Spencer Toth hit a home run in the seventh inning to tie it, and DH Joe Riddle hit an RBI single for the winning run. SS Johnny Farrington hit an RBI single for the winning run for the Eagles in the second game. Steve Karkenny hit a two-run home run in the first inning of the third game to give the Mustangs all the runs they needed. He added another RBI later in the game, and finished 3-for-3 with three runs scored. 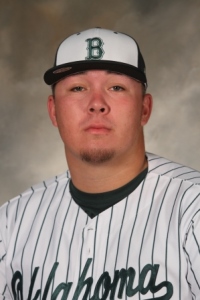 #10 Oklahoma Baptist ran their record to 22-0 with a double-header sweep of Roosevelt, 23-7 and 8-5. They got their first loss of the season the next day against Northwood (TX), 7-3 (9 innings, scheduled for 7). The Knights got the winning run on a bases-loaded double by SS Luis Roman. The Bison won the nightcap of the double-header 7-6. They lead 7-2 after four innings, but the Knights got four runs in the top of the seventh to make it interesting; they left the tying run on third. 1B Steven Knudson batted in five of the Bison runs with two doubles. A scheduled third game of the series was rained out.

#11 Faulkner swept #23 Belhaven, 9-2, 5-2, and 4-3. Thomas Dorminy went the seven-inning distance in the first game, allowed four hits, struck out five. C Robert Llera and DH Sergio Sanchez each hit two-run home runs. LF Esteban Paula went 3-for-4 with a double and an RBI in the second game. The Eagles out-hit the Blaszers 11-3 in the third game, but the Eagles needed a run scored by Paula on a ground out by SS Dauris Holguin in the seventh inning to win it. Kurt Lipscomb, who allowed one hit over the last three innings, got the win.

#12 Oklahoma City lost a mid-week game to Bacone, 8-3. They won two of three against Southwestern Christian, 13-2, 18-0, and 0-1. The Stars blew open the first game with seven runs in the sixth inning. Starter Shane Henderson pitched 6 1/3 innings of shutout ball, allowed two hits, struck out ten. In the second game, Chris Pike came up one base on balls short of his second perfect game of the season. He struck out an astonishing 17 of the 22 batters he faced. He struck out the side in the third, fourth, fifth, and seventh innings. He threw 85 pitches. Story

In the third game, Forrest Weaver went the seven-inning distance for the Eagles, allowed five hits. Stars starter Michael Nolan had better numbers; he also went the distance, allowed only four hits, and struck out 11; the only run of the game came when Nolan recorded a strikeout, but the batter reached first on a passed ball, and courtesy runner Tanner Kirk came home.

Pike's perfect game was against Saint Gregory's on March 7. He struck out 18 in that one, including 14 in a row during the first five innings. He struck out the side in the seventh to finish it. Story with complete video of the game.

Note: I will be traveling from Ecuador to Mexico next week, so you might not see a summary for the first coaches' poll of the season.