The NAIA Coaches' poll for April 23, with Boyd Nation's ISR ranking. Recap below.

#1 Oklahoma City (#44 in SoS) won three of four games at Wayland Baptist, 12-1, 7-3, 10-11, and 21-5. Derek Howell got the win in the first game, allowed three hits over six innings, struck out five. Cody Crabaugh went the seven-inning distance in the second game, allowed two earned runs on three hits, struck out six (story). The Stars led the third game 10-1 going into the bottom of the seventh and last inning, but the Pioneers got a grand slam home run by 2B Bernie Rosario, and won it with a two-RBI single by LF Colton Palmer. Three of the Pioneers' runs were unearned. The Pioneers led the fourth game 5-2 after the first inning, but the Stars put it away with seven runs in the second inning, led by a three-run home run by DH Jonathan Sigado (story). SS Chase Jensen went 10-for-15 for the series, hit four home runs, two triples, a double, and batted in nine runs. He stole two bases. He was named NAIA Player of the Week.

The Stars finished the week with a 13-6 win over Texas Wesleyan. The Stars hit four home runs; two by CF Cody Ferrell, the others by Sigado and 3B Chris Muñoz. Dalton Bernardi got the win, allowed four hits over five innings, struck out five (story).

Crabaugh is 11-1, 2.12 ERA. He is third in the NAIA in wins. Howell is 9-1, 1.33 ERA (tied for ninth-lowest in the NAIA), with 65 strikeouts. The Stars complete their regular season by visiting #23 Rogers State April 25, and hosting Rogers State April 27 (live video for a price). They need to win only one of these four games to win the Sooner Athletic Conference pennant.

#2 Faulkner won two games at Union C. (KY), 5-1 and 3-0; a third scheduled game was rained out. Johnny Shuttlesworth got the win in the first game; he went five innings, allowed three hits, struck out five. 2B Luis Sanchez hit a two-run home run in the first inning to give the Eagles all the runs they needed. Will Dismukes and Labradford Griffis combined for the shutout in the second game. Dismukes went five innings, allowed three hits, struck out six; Griffis didn't allow a hit. C Zach Colby hit an RBI double in the first inning for the winning run (story).

Shuttlesworth is 10-1, 1.30 ERA, with 74 strikeouts. The Eagles now lead #4 Lee by ½ game in the Southern States Athletic Conference standings. They finish their regular season at Auburn-Montgomery April 25-26.

#3 Northwood (TX) won two of three games at Jarvis Christian, 4-3 (11 innings), 9-4, and 2-5. SS Elvin Rodriguez singled in the winning run in the first game. Andres Caraveo got the win in the first game, retired all six batters he faced. C Adam Humes went 2-for-3 with four RBI in the second game. The Knights out-hit the Bulldogs 10-6 in the third game, but SS Ernie Aguilera batted in three runs and scored another for the Bulldogs.

The Knights won the Red River Athletic Conference pennant. The conference tournament will be at LSU-Shreveport April 27-30, and the Knights will play Texas College in the first round (live audio).

#4 Lee defeated Bryan 13-3 (story), and had games against Tennessee Temple and Brewton-Parker rained out. They got in two games at Brewton-Parker, however, and split them, winning 4-1, and losing 4-5. LF Derrick Pitts hit a three-run home run to win the first game. Jeremy Stawychny entered the game in the second inning, allowed one hit over five innings, struck out seven to get the win. 1B Jacob Bogaards went 2-for-4 with two RBI for the Barons in the second game. The Flames got a run in the top of the ninth to make it a one-run game, had the tying run at third when the game ended (story). The Flames finished the week with a 4-1 win over Georgia Gwinnett. 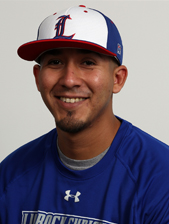 #5 Lubbock Christian swept four games against #23 Rogers State, 5-4, 9-1, 3-0, and 9-4. C Jason Fisch hit an RBI double with two out in the bottom of the seventh and final inning to tie the first game, and pinch-hitter Josh Powe hit a walk-off RBI double for the winning run. Monty McCasland got the win, threw four pitches, retired two batters. Derek Loera went the seven-inning distance in the second game, allowed four hits, struck out eight. SS Christian Vasquez hit an RBI double in the second inning for the winning run (story). Jack Mabe pitched a complete seven-inning shutout in the third game, allowed six hits, struck out three. 2B Brennyn Smith scored the winning run in the first inning on a ground out by 3B Joel Lutz; Smith was 2-for-3 for the game. Vasquez went 4-for-4 with three doubles and an RBI in the fourth game. Jarrett Porter got the win (story). 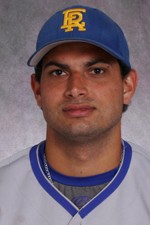 #6 Embry-Riddle swept three games at Webber International, 5-2, 6-5, and 12-7. RF Kevin Lindheim hit a two-run home run for the winning run in the first game. Kevin Maloney got the win (story). Lindheim hit another home run in the second game, went 3-for-4. 1B Jordan Johnson scored the winning run when DH Mike Gragilla reached on an error. Jon Rapose got the win in relief, went four innings, allowed one hit, struck out five. Lindheim went 2-for-5 with a double and three RBI in the third game.

A scheduled double-header against Brewton-Parker was cancelled. The Eagles have won The Sun Conference pennant. They finish their regular season at Thomas (GA) April 24-25. The Sun Conference tournament is April 30-May 4, at Fort Myers, FL.

#7 and ISR #1 Lewis-Clark State is #12 in SoS. The Warriors split four games at Division II Western Oregon, winning the first two 9-6 and 13-12, and losing the other two 4-2 and 2-1. RF Cody Lavalli, 2B Ryan Sells, and SS Bobby Joe Tannehill hit home runs in the first game. LHP Anthony Armanino got the win, went seven innings, allowed five hits, struck out six (story). The Warriors trailed the second game 5-1 after five innings. They took the lead with six runs in the top of the sixth, and went into the bottom of the ninth with a 13-8 lead. The Wolves made it a one-run game with a a two-run home run by LF Matt Nylen in the bottom of the ninth. They had the bases loaded, and 1B Brady Steiger caught a line drive to end the game. Tannehill and 3B Jacob Cano both went 3-for-5 with two RBI. SS Blake Miller hit an RBI double for the winning run for the Wolves in the third game; he finished 3-for-3 with two doubles and two RBI (story). Both of the Wolves' runs in the fourth game came on a rwo-RBI single by SS Blake Miller. The Wolves used four pitchers to hold the Warriors to six hits (story).

Steiger is fifth in hitting in the NAIA with an average of .440. The Warriors host British Columbia (ISR #24) April 26-28, and can clinch the NAIA West pennant by winning one of the four games (live audio).

#8 The Master's won two of three at #13 Cal State San Marcos, 11-8, 11-4, and 2-10. 3B Cody Harris went 3-for-5 with a triple and three RBI in the first game. LF Chris Talley hit a three-run home run. A.J. Work got the win (story). The Mustangs scored all of their runs in the final three innings of the second game. RF Ryan Shackelford went 3-for-5 with a triple, a double, and three RBI. Andrew Klausmeier got the win, went eight innings, allowed one earned run on five hits. CF Kyle Secciani went 2-for-3 with two RBI for the Cougars in the third game. Hunter Brown got the win (his first of the season), went 5 1/3 innings, allowed two runs on seven hits (story).

#9 Tennessee Wesleyan swept three games against Montreat, 6-4, 1-0, and 8-1, to clinch the Appalachian Athletic Conference pennant. 1B Jake Stone hit an RBI single for the winning run in the first game; he finished 2-for-2 with two RBI. Corey Rhoney got the win. Jarrod Jameson and Noah Piard combined for the shutout in the second game. Jameson went six innings, allowed four hits, struck out six. He was actually out-pitched by the Cavaliers' T.J. Fussell, who went the seven-inning distance, allowed only five hits, and struck out seven. 2B Brad Carpenter scored the only run of the game on a ground out by 3B Aaron Stubblefield. Stubblefield went 4-for-5 with a double and two RBI in the third game. Brent Adheen pitched seven shutout innings, allowed six hits, struck out nine (story).

Jameson is 12-0, 2.77 ERA, with 53 strikeouts, and his twelve wins puts him in a tie for the NAIA lead. The Bulldogs finish their regular season at Virginia Intermont April 27-28 (live video). The AAC tournament starts March 29 in Kingsport, TN.

#10 York won two non-conference games, defeating Concordia-Nebraska 5-1 and Hastings 4-3 (10 innings). RF Alec Abend went 2-for-4 with two RBI in the game against Concordia. SS Isidro Carrizoza scored the winning run against Hastings. He reached base on a misplayed ground ball, and scored on a wild pitch. The Panthers out-hit Hastings 5-4, and the two teams used a total of ten pitchers. Julio Angulo got the win. 1B Trevor Ramos went 2-for-4 with two RBI (story). 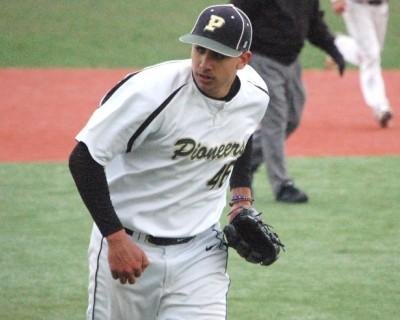 RHP Manny Perdomo pitched a seven-inning no-hitter for #25 Point Park in a 1-0 win at Division II Wheeling Jesuit. He had a perfect game going into the seventh inning, but hit the first batter he faced in the seventh. He struck out ten batters (story). He was selected the NAIA Pitcher of the Week. The Pioneers have won 26 of their last 28 games, and won the Kentucky Intercollegiate Athletic Conference pennant. The KIAC tournament will be at Indiana Southeast (New Albany) April 24-27.