The NAIA Coaches' poll for April 16, with Boyd Nation's ISR ranking. Recap below the fold.

#1 Oklahoma City (#37 in SoS) swept four games against #6 Lubbock Christian, 3-2, 4-3, 1-0, and 7-3. SS Chase Jensen hit a home run in the bottom of the seventh to win the first game. Derek Howell went the seven-inning distance, allowed five hits, struck out nine. Cody Crabaugh got the win in the second game, went 4 2/3 innings, allowed four hits, struck out five. RF Jonathan Rodriguez hit a sacrifice fly for the winning run (story). Shane Henderson and Davis Henderson combined for the shutout in the third game; Henderson went 5 2/3 innings, allowed five hits, struck out seven. Jensen hit an RBI single to bring in the only run of the game. In the fourth game, the Stars scored all seven of their runs in the sixth inning. The winning run was scored by Jensen on a passed ball, and two more were walked in. Patrick Goelz got the win in relief, struck out two of the three batters he faced (story).

Crabaugh is 10-1, 2.07 ERA. His ten wins put him in a tie with Jarrod Jameson of Tennessee Wesleyan for second-best in the NAIA. Howell is 8-1, 1.31 ERA (eighth-lowest in the NAIA), with 60 strikeouts. The Stars lead #15 Rogers State by three games in the Sooner Athletic Conference. The Stars visit Wayland Baptist April 19-20. 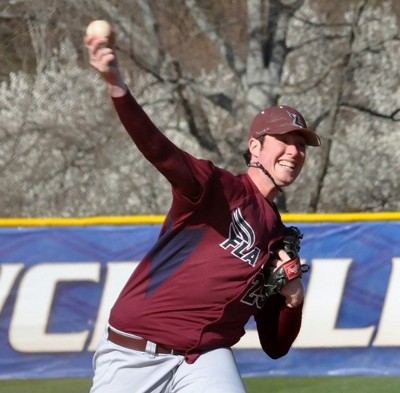 #2 Lee defeated #10 Tennessee Wesleyan in mid-week, 8-6. CF Brady Renner hit a two-RBI single for the winning run in the bottom of the seventh inning, but the Flames were able to hold onto the lead with another phenomenal relief performance by Andy Hillis. He walked three of the batters he faced, and struck out the other eight. The Flames won two of three games against the defending champions during the regular season (story). The Flames then won two of three against Southern Wesleyan, 2-4, 3-2, and 11-1. Matt Craig went the distance for the Warriors in the first game, scattered eight hits, struck out four. The Warriors' winning and insurance runs came on hit batters with the bases loaded (story). The Warriors out-hit the Flames 6-4 in the second game, but the Flames got three unearned runs on three errors in the fifth inning. Jose Samayoa got the win. Keegan Yuhl pitched seven shutout innings in the third game, allowed four hits, struck out seven. SS Josh Silver went 2-for-3 with a home run and three RBI, and drew two walks (story).

#3 Northwood (TX) swept three games against Huston-Tillotson, 10-0, 12-3, and 5-2. Roman Gomez, Colton Reavis, and Jacob Overbay combined for the shutout in the first game; Gomez went five innings, allowed four hits, struck out six. RF Joee Reyna went 3-for-4 with a double and three RBI and three runs scored. The Knights started the second game with seven runs in the first inning, led by a three-run home run by 1B Mario Cardona. 1B Adam Humes went 3-for-4 in the third game, and his home run was the winning run.

The Knights continue to lead #24 Bacone by ½ game in the Red River Athletic Conference standings. They visit Jarvis Christian April 19-20.

#4 Faulkner won two of three against Southern Polytechnic (ISR #25), 12-6, 4-0, and 1-5. In the first game, the Hornets got six runs (four earned) off Johnny Shuttlesworth in the first three innings, but the Hornets were held scoreless the rest of the way, and 2B Luis Sanchez went 4-for-4 with a triple, a double, and five RBI, and 1B Cayleb Coker hit a two-run home run (story). Will Dismukes and Labradford Griffis combined for the shutout in the second game; Dismukes went six innings, allowed seven hits, struck out six. Matt Adams got the win for the Hornets in the third game, went eight innings, allowed four hits, struck out seven. C Steven Seiter hit a three-run home run in the first inning (story). 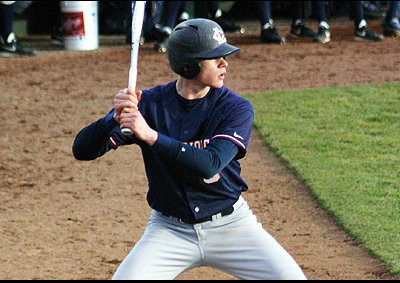 #5 and ISR #1 Lewis-Clark State is #13 in strength of schedule. They swept four games against Simpson, 3-2, 13-0, 9-2, and 4-2. All three of the runs in the first game came in the second inning; RF Cody Lavalli scored on a throwing error, and DH Kevin Hawk hit a two-RBI double. Lavalli was 4-for-4. Anthony Armanino got the win, went five innings, allowed four hits, struck out nine. Lavalli went 3-for-5 with a home run, a triple, and five RBI in the second game. Carsen Nylund and Kasey Knigge combined for the shutout; Nylund went seven innings, allowed five hits, struck out six (story). DH Kyle Knigge went 3-for-4 with an RBI in the third game. Simpson led the fourth game 2-1 going into the bottom of the eighth inning. The Warriors had trouble solving Simpson starter Joshua Graves, who held them to six hits over the first seven innings. However, the Warriors tied it with a leadoff home run by Lavalli, got the winning run on a two-RBI single by 3B Jacob Cano. David Murillo got the win in relief, pitched three perfect innings, struck out five of the nine batters he faced (story).

#6 Bellevue swept Central Christian, 6-1, 7-2, 7-0, and 4-0. Robert Greco went the distance in the first game, allowed five hits. DH Tanner Moore went 3-for-5 with a home run, a triple, an RBI, and three runs scored. 3B Nate Mullins hit two two-run home runs in the second game. Michael Calderon went the seven-inning distance, allowed four hits, struck out seven (story). Ricky Holm went eight innings in the third game, allowed three hits, struck out 15. RF Dusty Kerns went 4-for-5 with two doubles and an RBI. Kody McFarland pitched a one-hitter in the fourth game, and had a no-hitter going into the seventh and final inning. He struck out 12, didn't walk a batter. DH Dan Smolinski singled in the winning run (story).

The Bruins got a third straight shutout against Dakota State, 2-0. Kyle Kinman went the seven-inning distance in this one, allowed four hits, struck out ten. Both of the runs scored on a double by 2B Andy Smolinski. The Bruins completed the double-header sweep with a 5-3 win, scoring all their runs in the bottom of the second inning. Sean Felt got his first win of the season, in relief. He struck out seven batters in only 3 2/3 innings, allowed no runs on two hits. LF Tanner Moore went 2-for-3, and moved from the outfield to the mound to pitch the seventh inning, got his sixth save of the season (story).

Holm is 7-0, 2.82 ERA, and 78 strikeouts on the season. The Bruins are a game behind #14 York in the Midlands Collegiate Athletic Conference; they both have two conference losses. The Bruins host Oklahoma Wesleyan April 19-20.

#6 Lubbock Christian was swept by #1 Oklahoma City (see above). However, they salvaged a 6-5 win over Division I Texas Tech. RF Brent Leslie hit a sacrifice fly in the top of the ninth, scoring SS Christian Vasquez for the winning run. 2B Brennan Smith went 2-for-4 with a triple and two RBI for the Chaparrals. The Chaparrals used five pitchers; Monty McCasland, who pitched the seventh and eighth innings, got the win; he allowed one hit, struck out three. Kyle Forsyth got a save. The announced crowd was 2,680 (story).

The Chaparrals host #15 Rogers State in the battle for second place in the Sooner Athletic Conference April 19-20 (live video).

#8 Embry-Riddle lost 2-1 (10 innings) at Tampa, ranked #2 in Division II. The Eagles' only run came in the first inning, on a sacrifice fly by RF Kevin Lindheim that was just short of a home run. The Eagles stranded nine base runners. Tampa won it on an RBI single by pinch-hitter B.J. Zimmerman (story).

The Eagles then won two of three against #23 Saint Thomas, 5-3, 14-3, and 1-2 (six innings). The first game was close all the way, even though the Eagles out-hit the Bobcats 11-4. The winning run was singled in by SS Jordan Romero in the bottom of the eighth inning. Ronnie Lozada got the win in relief (story). Lindheim went 3-for-4 with two doubles and three RBI in the second game. The third game was halted by heavy rain and lightning. 1B Oscar Romero scored the winning run for the Bobcats, on a ground out by SS Cesar Ramirez. Josh Ruiz got the win, allowed two hits and struck out five over five innings (story).

The Eagles lead the Bobcats by 1 ½ games in The Sun Conference. They visit Webber International April 19-20, and host Brewton-Parker April 22 (live video for a price). 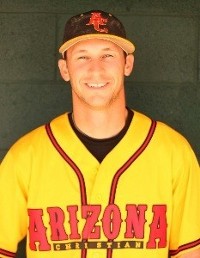 #9 The Master's was swept by Arizona Christian (ISR #9), 15-4, 7-0, and 13-3. RF Nathan Enriquez went 4-for-6 with a double and four RBI for the Firestorm in the first game (story). LHP Mike Lachapelle, a transfer from New Mexico, pitched a complete-game shutout in the second game, scattered eight hits, struck out 12. Lachapelle was named NAIA Pitcher of the Week. The Firestorm got seven runs in the second inning of the third game. C Orrin Sears went 3-for-4 with a three-run home run, a triple, and four RBI. Stephen Thompson got the win, went six innings, allowed two runs on three hits, struck out three (story).

#10 Tennessee Wesleyan lost a game to #2 Lee in mid-week (see above). The Bulldogs then won two of three at Reinhardt, 8-3, 4-1, and 4-5. 3B Jake Stone hit a home run for the winning run in the first game. Corey Rhoney went the distance, allowed only one earned run on eight hits, struck out seven (story). Jarrod Jameson got the win in the second game, running his record to 10-0, 3.03 ERA. He allowed three hits in six innings. CF Travis Burnside scored the winning run on an error, and RF Trey Griffin hit a two-run home run. C Tyler Adams hit an RBI single for the winning run for the Eagles in the third game. The Bulldogs got three runs in the top of the seventh and final inning. The Bulldogs had the bases loaded with one out. SS Wes Minton flied out; LF Logan Dalton tagged up at third, but was thrown out at the plate to end the game (story).

Stone has 11 home runs, which puts him in a tie for fourth place (with Joel Lutz of Lubbock Christian and two others) in the NAIA. Griffin has ten home runs. The Bulldogs lead Union C. (KY) by 4 ½ games in the Appalachian Athletic Conference. They visit Georgia Gwinnett on April 17, and host Montreat April 20-21.