GSAC: Biola gets no-hitter, Swanson strikes out 14 for Concordia 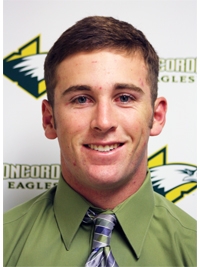 It wasn't pretty, but five Biola pitchers combined for a 6-0 no-hitter against The Master's, giving the Eagles the series win, and their first no-hitter since 1970.

Josh Staumont pitched the first 5 1/3 innings for the Eagles, got the win. He struck out three, walked five. The next pitcher, Garrett Picha, faced only one batter. He walked him, and threw a wild pitch while doing it. He was relieved by Erick Allen, who went 2 1/3 innings. Javier Martinez came in with two outs in the bottom of the eighth, and a ground ball to third base was scored as an error, the only one of the game. Martinez got a fly out to end the inning, and struck out the first batter in the bottom of the ninth. Will Emerson recorded a fly out and a strikeout to complete the no-hitter.

C Nick Oddo went 3-for-5 with a home run and three RBI for the Eagles. 1B Sage Poland singled in the winning run in the second inning. Eagles Head Coach John Verhoeven didn't realize that his team got a no-hitter until ten minutes after the game was over.

LHP Cole Swanson, a transfer from San Diego State (he pitched 26 1/3 innings for the Aztecs last year, struck out 21), got the start for Concordia-Irvine's season opener, and he delivered a complete-game one-hitter against Arizona Christian. He struck out 14. The one hit was a two-run home run by 1B Ryan Jones in the seventh inning. The final score was 4-2. The winning run for the Eagles came on an RBI single by LF Dylan Bryant in the fifth inning. 1B Bryan Garza completed the Eagles' scoring with a home run in the sixth.

The Firestorm won the second game of the series 3-1, on an RBI double by C Orrin Sears in the sixth inning. The Eagles won the deciding game of the series 10-4. 1B Brian Garza scored the winning run on a balk in the third inning. 2B Spencer Ofelt went 2-for-4 with a double and three RBI.

In the other Golden State Athletic Conference series, Westmont defeated San Diego Christian two games to one. The Warriors won the first game 6-1 on a good pitching performance by starter Torin Shaikh. He pitched six scoreless innings, allowed only two hits, struck out two. The Hawks won the second game 6-4; they led all the way, but the Warriors made things interesting by scoring three runs in the bottom of the ninth, including a two-run home run by RF Chris Stroh. Courtesy runner Alex Garza scored the winning run on a error in the top of the ninth. The catcher he was running for, Alex Mann, went 3-for-5 with an RBI. The Warriors won the deciding game 5-3, on an RBI double by LF Chris Stroh.