Verhoeven stepping down at Biola 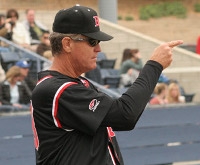 John Verhoeven, Head Coach of the Biola Eagles for 16 seasons, has resigned, effective at the end of the 2013 season.

Verhoeven is a highly-regarded coach at a highly-regarded program. His record is 521-275-6, and he had only one losing season. He took the Eagles to five Golden State Athletic Conference championships, and to the Baseball National Championship in 2001, 2003, and 2005.

Verhoeven played four American League seasons as a right-handed pitcher with the Angels, White Sox, and Twins. He had a career ERA of 3.76.