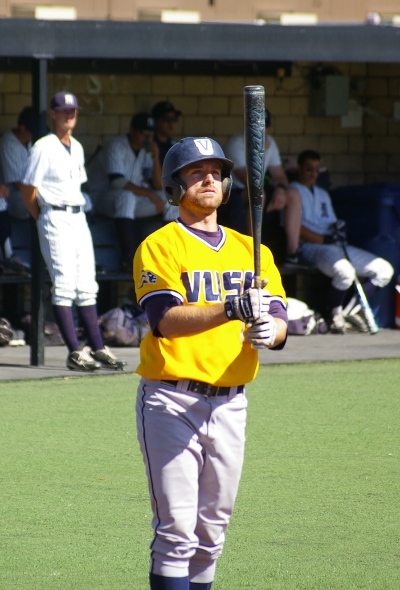 Results from the second day of the Opening Round tournament in Santa Clarita, CA:

RHP Eddie Rivera pitched the third shutout of the tournament in four games, and the host team went two-and-out without scoring a run. Rivera held the Mustangs to one hit, struck out three, walked two, threw 106 pitches.

The winning run came in the second inning, on a classic example of small ball. CF Thomas Mobley led off with a double, was bunted to third base by RF John Schwer, then scored on a sacrifice fly by 2B Taylor McKnight. The insurance run came in the eighth inning, when SS Nick Rodda scored on a single by LF Brandon Sandoval. Rodda reached on a fielder's choice, then went to third on a bad pickoff attempt. 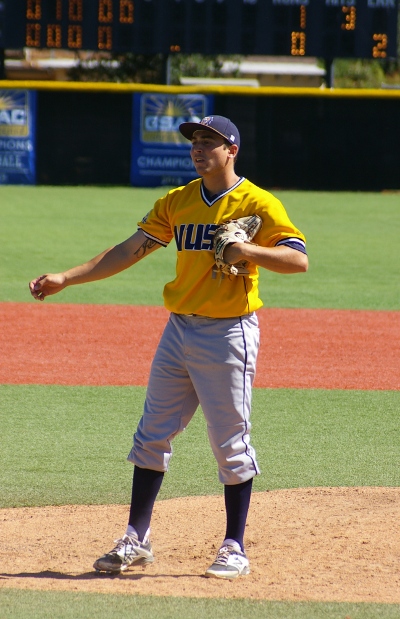 The only time the Mustangs threatened was in the fifth inning. DH Joe Riddle hit a double with one out for the Mustangs' only hit of the game. The next batter walked, and RF Josh Brown hit a sacrifice bunt to put runners on second and third. Colin Nyenhuis went in to pinch-hit, and grounded out to first base.

RHP Andrew Klausmeier also went the distance, allowed five hits, struck out two. The Mustangs were charged with three errors, but also made two excellent defensive plays in the late going to keep it close. In the eighth, 2B Sam Robison robbed DH Bret Collins of a hit by picking up a ground ball that was in center field. In the ninth, 1B James Scott grabbed a line drive by McKnight to end the inning. 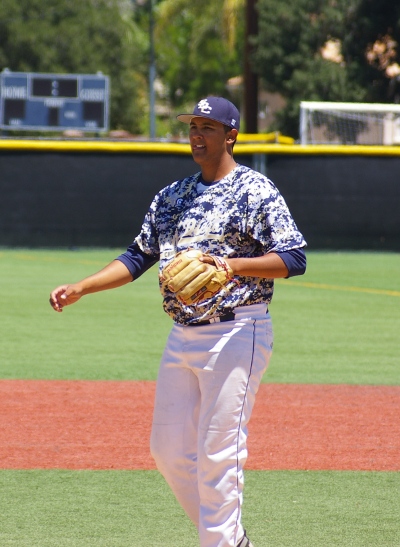 The Panthers took an early lead on an RBI single by 2B Jordan Zylstra in the first inning. They stranded 1B Brendan Bender on third in the top of the fifth. In the bottom of the fifth, two walks and a hit by 3B Jeff Lusardi loaded the bases, and Panthers starter LHP Jordan Anderson turned the ball over to RHP Ryan Butzer. The next batter, RF Peter Hoyt, put the ball in play, and a wild throw by Zylstra allowed two runs to score.

Neither team threatened until the bottom of the eighth, when Hoyt was stranded on third. The Panthers led off the top of the ninth with a single by CF Cam Cooper. The next batter walked, and a single by SS Derek Dennis loaded the bases with no outs. The Hawks' starter, Mark Vasquez, was relieved by Joey Aquino. The next batter, Bender, hit a fly ball to left field, but a stiff wind prevented the ball from going deep enough for Cooper to come home. The next batter hit an infield fly, and the game ended on a ground ball and a force out ar second.

Vasquez scattered eleven hits and walked six batters over eight-plus innings, struck out four. Anderson allowed three hits and struck out four, but walked four batters. Lusardi hit a double and had all four of the Hawks' hits. 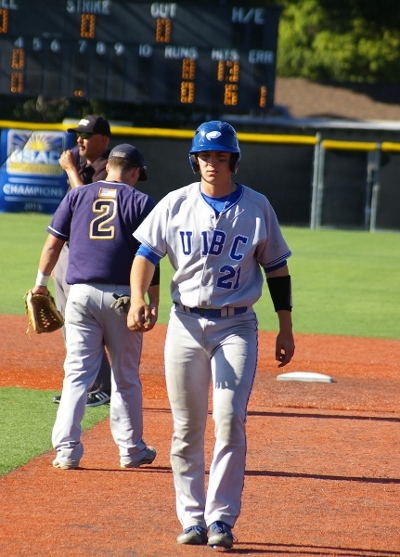 The Thunderbirds left the bases loaded in the first inning, scored two runs in the second inning, then took over the game with six runs in the third inning, led by a two-RBI single by DH Mackenzie Parlow.

Thunderbirds starter Bryan Pawlina kept the Lions off the board for the first four innings, but had to pitch his way out of a bases-loaded jam in the fourth. The Lions got on the board with an RBI on a ground out by CF Thomas Mobley and an RBI single by RF John Schwer. Pawlina turned the ball over to Sean Callegari after five innings; he allowed ten hits, struck out six. The Lions got two runs off Callegari in the sixth, on an RBI single by DH Bret Collins and a run walked in. The Lions left the bases loaded, but Callegari got a three-up, three down seventh inning. Alex Graham went the rest of the way for the Thunderbirds, allowed two hits.

It took three hours and ten minutes to play this game. The Thunderbirds out-hit the Lions 21-14. Parlow finished 3-for-6 with three RBI. 1B Bruce Yari went 4-for-6 with an RBI. SS Nick Rodda went 3-for-4 for the Lions. Pawlina got the win, and Lions starter Scott Torrey got the loss.